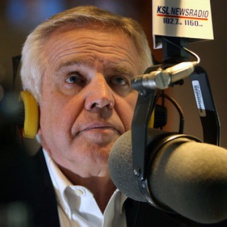 According to news reports, the Trump administration is considering constructing an Immigration and Customs Enforcement (ICE) immigration jail in Salt Lake. This news resulted in KSL Radio talk show host, Doug Wright, spending forty minutes on a highly uncivil, one-sided discussion of the issue even though Wright purports to be a proponent of unbiased civil discourse.

“Why Salt Lake City?” asked Wright who immediately concluded that the Trump administration was punishing Utah. “Political payback, vindictiveness, retribution, throwing raw meat to the base who just eat it up” were all terms used by Wright who pleaded for “sane people” to come forward thereby implying that anyone who supports the Trump administration and the enforcement of immigration laws is not sane.

Wright’s first guest was former Salt Lake City Police Chief Chris Burbank who was forced to resign over his mishandling of a sexual harassment case. Burbank, like Wright, downplays the seriousness of illegal alien crimes and both can be seen laughing out loud while joking about illegal alien document fraud and identity theft in the following video.

In keeping with his long-standing support for illegal aliens, Burbank asserted that law enforcement officers have to maintain good relations with illegal aliens and he said that Trump and his supporters should end their xenophobic rhetoric —even though 75% or so of all illegal aliens routinely commit job-related felonies.

Following Burbank, Wright brought on former Salt Lake City Mayor Rocky Anderson and engaged in a highly uncivil conversation that included character attacks and what some may even deem to be hate speech.

Wright began by once again noting his ‘distress’ with the proposal to put an ICE jail in Salt Lake and said that “as much as this is bugging me, I can only imagine how this is affecting Rocky Anderson.”

Anderson did not disappoint.  Anderson accused Trump, and by extension his supporters, of being “fascists, racists, uncompassionate, of lacking moral, religious and humanitarian values and of supporting an unbelievably cruel fascist agenda.” Wright listened to Anderson’s comments and then referring to Trump and his supporters said: “I’ve never seen anything like it. I am so amazed at what is happening to our country and it scares me, I won’t mince words, it scares me….There’s something so troubling happening in our country.”

Wright then sat silently by as Anderson labeled folks who refuse to accept his, Burbank’s and Wright’s pro-illegal alien “facts” as despicable and as Anderson said that anyone not willing to solve the problem as he would are “moral cowards” who “totally disregard peoples’ lives.” Anderson wrapped up by calling for a massive march against “this insanity” and for civil disobedience in order to put an end to this “cruelty to the [illegal] immigrant population.”

Anderson wrapped up by calling for a massive march against “this insanity” and for civil disobedience in order to put an end to this “cruelty to the [illegal] immigrant population.”

So Doug Wright who regularly bemoans the uncivil nature of today’s polarizing political discourse facilitated and participated in over 40 minutes of a very uncivil, one-sided, highly polarizing discussion. He didn’t include anyone in the discussion who disagreed with his position. He didn’t object to the uncivil language of his guests. And he relied on his own set of “facts” without giving any consideration to those of the other side—some of which can be found below.

If Wright truly believes in civil discourse, he should set the example by limiting the uncivil, polarizing rhetoric on his program and he should include those who see the issue from a different angle rather than allowing his guest to, freely and without challenge, denigrate and disrespect them.

Facts that Wright refuses to Acknowledge.

Illegal Aliens Turning Dreams of American Children into Nightmares.  A joint investigation by the Utah Attorney General’s Office, Office of Inspector General for the Social Security Administration and U.S. Immigration and Customs Enforcement uncovered an alarming crime spree involving illegal aliens and identities stolen from victims under the age of 12. In the words of former Utah Attorney General Mark Shurtleff,  “Identity thieves are no respecters of age. They will steal your children’s ID, ruin their credit and hurt them in ways never thought possible before they can graduate from grade school.  Children are vulnerable even if parents do everything right.” Not only do victims need to fix their credit, they may face problems if they apply for a school loan, Medicaid, food stamps or other government services.

House Immigration Subcommittee Hearing Draws Attention to Child Identity Theft and Document Fraud.  According to a NumbersUSA report, the first person to speak was Dr. Ronald Mortensen with the Center for Immigration Studies who used his five minutes to describe the extent of the ID theft problem and the unfortunate repercussions suffered by the victims. Most startling, he pointed out how children have had their names destroyed before they’ve even had an opportunity to make names for themselves as citizens. Dr. Mortensen’s testimony was a great lead into the dreadful story Jennifer Andrushko detailed about her son’s identification being stolen.  Jennifer Andrushko found out that the Social Security number of her 5-year-old son has been being used for more than a decade by an illegal alien for the purposes of employment and she explained that it was a nightmare trying to restore their son’s good name without the help of Social Security or any type of law enforcement.

Document Fraud in Employment Authorization: How an E-Verify Requirement Can Help.  Testimony of Jennifer Andrushko, Mother of a child victim of SSN identity theft committed by an illegal alien for the purpose of employment and obtaining other benefits.

Document Fraud in Employment Authorization: How an E-Verify Requirement Can Help. Testimony of Ronald Mortensen on how E-Verify can stop child identity theft.

Nine year old Utah Child Identity Theft Victim Denied Medicaid.  A 47 year old, male illegal immigrant from Peru is arrested in Springville, Utah for using a 9 year old girl’s Social Security number.  The theft was discovered when the child’s mother applied for Medicaid for her 9-year-old daughter — but was told her daughter didn’t qualify because the [9 year old] child was already earning income on her Social Security number. The man had not only been working using the girl’s number, but he also had obtained more than $10,000 in loans.

Illegal alien in Utah using a stolen social security number says he is sorry if he hurting someone but needs the number to work. According to the Utah Attorney General’s office, up to 20,000 Utah kids could have been affected in 2007 and that number is now estimated to be in excess of 80,000.

Even 2 year olds are not safe from illegal alien driven identity theft. This is the story of an adult illegal alien using a 2 year old Utah child’s fraudulently obtained Social Security number.