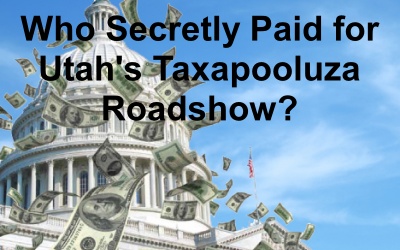 A citizens group has submitted GRAMA requests to the Utah Legislature and Governor Herberts’s office for documents relating to the funding of the Tax Reform Road Show (Tax Modernization). There was a fiscal note appropriation to fund and compensate the “Task Force” for travel and major expenses but no funds were allocated to create the “propaganda” websites, PowerPoint and video presentations, and the accompanying slick brochures and literature. The GRAMA request asks for how those things were funded since no taxpayer funds were formally earmarked for those segments.

The Legislature and Governor refused to honor the request free of charge even though it is clearly in the public interest. This raises concerns that there may be a cover up of serious procurement violations and the misuse of public funds. The Utah Legislature, Governor’s Office of Management & Budget, Stronger Futures (utah.gov), Kem C. Gardner Policy Institute at the University of Utah, and SL Chamber of Commerce have all produced sites and massive amounts of commentary/info that is estimated to cost in the hundreds of thousands of dollars.

The request was filed by Utah Legislative Watch (ULW), a group of small business owners and Utah citizens who have grown concerned that Washington DC style politics have infected Utah lawmakers. The group “promotes accountability and transparency from our policy makers by shining a light on proposed legislation and legislative practices.”

There are multiple GRAMA requests to different entities pending. The Governor’s office and legislature have asked for around $1,000 to fulfill the requests with the caveat that the cost could go up. There can be a charge for a privately funded GRAMA request but that cost is usually waived when the public interest is involved and is only supposed to cost the price of printing.

But, in true Washington D.C. politics style, the legislature has exempted itself from many of the GRAMA requirements that otherwise apply to state agencies. They charge for labor as well as printing and will not waive the fee for material that is in the public interest AND there is NO appeal process.

Given the reluctance to provide this info it is almost certain that the Legislature and Governor’s office will find additional charges in order to delay/prevent it from being released which raises the question of what they have to hide.

Once the material is released, additional GRAMA requests are anticipated that will need more funding. ULW estimates the final costs could be as much as $2,500 and has set up a GoFundMe page to accept donations from people who want to let legislators know that they can’t suppress information that may be embarrassing or possibly illegal. If there is any money left over, ULW will use it to further carry out its mission. To donate, click here: Help With GRAMA Requests

A credible analysis would probably need to be done by a lawyer trained in the relevant laws, because the meaning of all the intertwined legal citations affecting GRAMA requests and the legislature are surely not OBVIOUS to a lay reader. Shouldn’t a GRAMA request to an entity that gets federal money have the same guidelines as the federal process –  FOIA? Should it literally take months for Utah’s agencies to come up with the information when the so-called tax reform is being fast-tracked? If the information is shared electronically, should there be printing costs?

These may be topics the current Government Operations committee could discuss, and maybe agree on, but in looking at the current members of that committee, there is probably no way to get the votes to fix any of this.

Since lawmakers have no incentive to have certain public information made public, let’s send them a message right now by supporting the pending GRAMA requests and then support legislators who will actually change the current process over the longer run.