How Did Utah End Up With ‘Mitt McCain Flake? 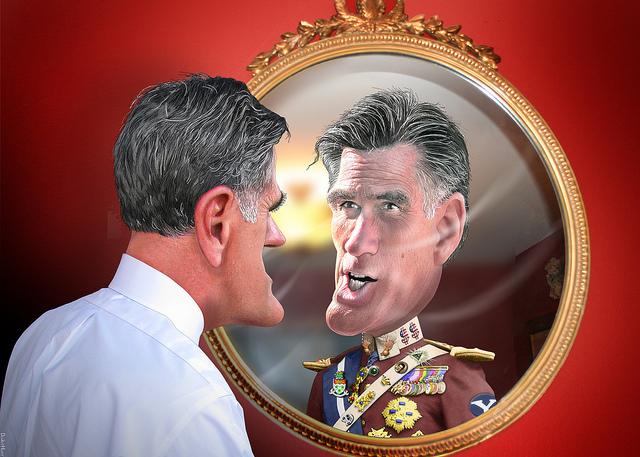 How Did We End Up With ‘Mitt McCain Flake?

Romney hadn’t even assumed office and Utah voters are already frustrated that he has joined the chorus of the left by criticizing a largely successful conservative president. He didn’t choose an accurate or respected news source to show his true colors. He chose the Washington Post, the “Pravda on the Potomac” which is arguably the most left-leaning, fake news source available. Once again Romney is proving that he has third-rate political instincts and cares more about himself than he does about being Utah’s representative. One political observer said “Romney’s commentary crystallizes all the reasons the old GOP establishment has been pushed aside. Like other Big Government Republicans who never liked Reagan, Mitt Romney wants to signal how virtuous he is in comparison to the President. Well, I’m most concerned and pleased with the actual conservative reform agenda.”

Where in the world is cardboard cut-out Mitt? Where is the Republican Party of Utah? Mitt Romney wants to be deeply loved and is trying really hard and doing everything he can to be relevant. The problem Romney faces is that he is a junior Senator from Utah trying to play national establishment politics and is not relevant. He’s a three-time loser who has never won a national election and actually lost to arguably the worst and most destructive President our country has ever had (a two-time loser even before 2016… a three-time loser after he came out basically supporting Hillary). The only thing that makes Romney relevant are the 665,000 Utah voters that sent him to Washington to supposedly represent their values. President Trump was elected by 63,000,000 Americans.

President Trump has a base. Romney does not.  But, he thinks he can use his seat as a launchpad for a 2020 Presidential bid and build a base by fooling Utahns and seducing anti-Trump people into supporting him. Everything is a triangulation with Romney. He uses the few things that he has done right to cover his countless fouls. Now, he will add his representation of Utah to his failures. And Trump will justifiably turn his back to Romney, and probably to Utah. In the meantime who will represent Utah in the Senate next to Mike Lee?

The upside here is that no one is supporting Romney’s commentary except for the liberal media and progressive liberal establishment. Does Romney have the insight to see what an idiotic move he’s made and apologize? That would require character. People with character don’t deflect from their own failings. They don’t focus on the failures of others. Utah has ended up with a ‘Mitt McCain Flake’. (American Thinker) What a waste. How is trashing our President representing Utah? This will be a painful 6 years. So sorry for Utah!

One truth that is glaringly obvious is that Romney is a master at projecting. In his op-ed, Romney said ‘The president shapes the public character of the nation. Trump’s character falls short.’ and that ‘the president has not risen to the mantle of the office’ Utahns were hoping that Romney would rise to the occasion. Instead, his actions are proving that he is short on character and unable to rise to the mantle of his own office.

Should Utah voters support the Republican President or the “Republican” Senator ATTACKING the Republican President? In a published article, ‘Mike Lee isn’t tired of winning under Trump’, Lee states “I quite like him,” adding that he intends to endorse Trump’s presidential bid this time around. “Look, I had some concerns and I expressed those. I’ve been pleased with the number of things he’s done, and he’s been very helpful to me on criminal justice reform. I’ve talked to him a lot and talking to him helps me develop a relationship with him.”

Jason Chaffetz, former Utah Representative and currently a Fox News contributor, called  Romney’s criticism of Trump ‘selfish’.  Chaffetz said  “I represented the people of the great state of Utah for eight and a half years. I want both Romney and President Trump to succeed. Romney readily accepted Trump’s endorsement when he was running for Senate, even after calling Trump a phony and a fraud in 2016. Nothing changed and Trump is the same person, which is part of what I like about President Trump.” Chaffetz said Romney “rode the Trump train all the way to Washington,” then showed little gratitude by biting the hand that fed him. “To the good people of Utah, some of whom will cheer these Romney comments, his job is to represent the state of Utah, not himself. This is not a good look for an incoming senator. In fact, this is selfish. It does not help Utah.”

In an article at the Washington Examiner, “It’s war: Rand Paul hits ‘Big Government’ Romney, calls Trump an ‘actual conservative’. “Paul, R-Ky., tweeted that Romney is a “Big Government Republican” and a faux conservative, and a top Paul aide said that Trump is delivering on his promises. In an afternoon conference call with reporters, Paul said that Romney’s personal attack was “virtue signaling” and a “minority position” among Republicans in the Senate. “I think this is going to be an anomaly,” he added.

Like other Big Government Republicans who never liked Reagan, Mitt Romney wants to signal how virtuous he is in comparison to the President. Well, I’m most concerned and pleased with the actual conservative reform agenda @realDonaldTrump has achieved.
https://t.co/vNvp2ZwyK7

Lou Dobbs from Fox News lashed out at Romney over the Trump op-ed: “He is a treacherous fool. He’s reprehensible. I can’t believe the people of Utah elected this creep.” Dobbs also ripped Romney for acting “petty” and “small” in his criticism. Dobbs was incredulous when Republican strategist Ed Rollins told him Trump endorsed Romney ahead of the 2018 election. “You mean the people of Utah didn’t know that he was anti-Trump,” he said to Rollins. “He didn’t run against Trump? He ran with Trump. So he’s lied to the people of Utah.” The man is as game-playing flopping political fish as they come.

Dan Bongino said  Mitt Romney Represents The “Swamp Rat Republicans”  Bongino said Romney is a “sell out” and a “fraud” and “the kind of guy who has absolutely decimated the Republican Party. When there is a museum left to the remnant of the swamp GOP and we’re all walking through this museum in 30 years of what used to be the GOP, exhibit one will be Mitt Romney, followed closely by Jeff Flake. The Democrats want to destroy the country immediately,” Bongino said. “The swamp rat Republicans are the manage decliners — ‘Don’t worry we’ll just manage the decline of the country. While we all keep our bow-ties and eat our foie gras lunches and get our money from our lobbyists.’”

Romney’s own niece, Republican National Committee (RNC) Chairwoman Ronna Romney McDaniel, slammed her uncle Mitt  Romney for Trump criticism: “POTUS is attacked and obstructed by the MSM media and Democrats 24/7,” McDaniel wrote on Twitter. “For an incoming Republican freshman senator to attack @realdonaldtrump as their first act feeds into what the Democrats and media want and is disappointing and unproductive.”

And President Trump said ‘I won’: “Here we go with Mitt Romney, but so fast! Question will be, is he a Flake? I hope not. Would much prefer that Mitt focus on Border Security and so many other things where he can be helpful. I won big, and he didn’t. He should be happy for all Republicans. Be a TEAM player & WIN!” Trump wrote on Twitter.

Interestingly, the Republican Party in Utah splits between the senator and the President. How many voters knew a vote for Mitt Romney in November would be a vote against the sitting President? One Utah voter said  “The truth is @MittRomney lacked the ability to save this nation. @realDonaldTrump has saved it. Jealousy is a drink best served warm and Romney just proved it. So sad, I wish everyone had the courage @realDonaldTrump had.

Romney got Trump’s endorsement before the UTGOP convention, got signatures to be on the ballot and contributed to the weakening of our Republic. Romney has a solid left leaning record as the former governor of Massachusetts. Many Utahns wouldn’t support him for Senator in the primaries because he didn’t stand on the GOP platform. Romney hates the Utah caucus system and feels that it is beneath him. Romney gave $140,000 to the Count My Vote people to gather signatures for him thus funding the signature gathering process. That is also how they lied to people to collect signatures for the CMV initiative for the ballot. It’s the biggest election fraud scam to ever hit Utah and it was funded by Mitt Romney. Yup, Romney did just that. He did that all and got elected from Utah. Tomorrow may be a different story.

One thing for sure, Utahns are not happy with Romney. The following are comments from social media:

William Clayton: “A carpetbagger puts himself at a big disadvantage when he presumes to understand the foreign culture into which he airdrops himself. Utah is essentially foreign territory for Mitt Romney, who has spent most of his life marinating in coastal progressive culture. And Park City, where he chose to build his Utah crash-pad, is an enclave of that same progressive culture. Romney senses (correctly) that President Trump’s personal past and his brash NYC attitude are incongruent with Utah Mormon culture. But Romney then jumps (incorrectly) to the conclusion that he’ll gain traction in Utah by attacking Trump in a way that he never dared attack Barack Obama during the 2012 presidential election.”

Bill Olson: “Mitt said that regardless of the politician, he’ll support policies that benefit Americans and those he represents in Utah. Romney said he won’t comment on all of the president’s tweets or problems, but “will speak out against significant statements or actions that are divisive, racist, sexist, anti-immigrant, dishonest or destructive to democratic institutions.” Then speak out against these actions as conducted by many Democrats and never-Trump Republicans and leave the President alone!”

Leo Lines: “ You need to read between the lines from Romney’s statement. This is what he really said; “With the nation being made great again and Mitt is still resentful and angry, presidential leadership qualities that mitt does not have are indispensable. And it is in this province where Mitt’s shortfall has been most glaring”

Kent Heaps: “Utah got what they paid for…a cheap politician.”

David Yu-lin Chiu: “Trump seems perfectly comfortable in the presence of the Lord’s apostles and quite graciously generous.”

Lloyd J Dauer: “Romney does the bidding of Gail Miller his benefactor”

Marcy Underdahl: “And I can make a poll show anything I want it to, so what. Polls no longer reflect peoples opinions, they are used to shape and influence opinions and the PERCEPTION of acceptable opinions.”

Stephen J. Kelsey: “KSL and the Deseret News have seemed to become liberal establishments of late.”

Robert Strang: “Mitt likes to align himself and his wallet with the Gadianton Management system of Mammon, supporting the theft of your labor and the enherent Preamble right of the Constitution “for” the US. Follow the Money kind of guy, create a Lie Kind of Guy, tell you one thing, do another.”

Val Jo Hess Sansevero: “Romney is not now nor will he ever be my Senator. He is the most unethical person in my experience. Go home to MA. You can’t get elected there? They know you too well”.

Jewish world Review: Romney’s commentary crystallizes all the reasons the old GOP establishment has been pushed aside