Utah Tax Reform: Create a Crisis and Sell it to the Public 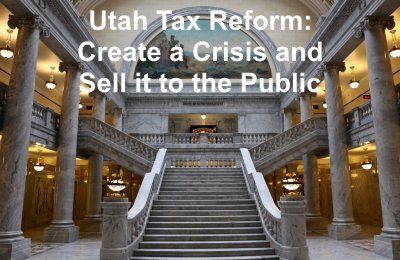 ·         Republicans then packaged this as a crisis in order to convince Utahns that the state has to find new things to tax.

·         The Republicans’ end-game is for the governor to call a special session and for legislators to enact taxes on more things with the incidence of those taxes falling primarily on low and middle-income Utahns and on small businesses.

·         Republicans voting for the bill will be rewarded with large campaign contributions from big businesses and by the uber-rich since they will benefit the most from it.

·         Unless Utahns take action to stop this, they will soon be paying more taxes in order to fund even more state spending, to further socialize big business costs and to reduce income taxes paid by the uber-rich.

The Republican governor of Utah and Republican legislative leaders, with strong encouragement and support from the Enemy of the Taxpayer, Salt Lake Chamber of Commerce and the Kem C. Gardner Public Policy Institute, have concluded that the state of Utah has to find something else to tax even though state spending has increased by 146% during the past 20 years while population growth was 45% and inflation 44%.

In order to maintain the exponential growth of state government, Republicans need to convince the public that the state needs new things to tax.  And just how do they do that? Well, they:

1. Drive up income tax collections by increasing taxes on low- and middle-income Utahns by as much as $1,200 for larger families as explained in the footnote.

3. Package the above as a “funding imbalance” crisis and use taxpayer funds to create and populate a propaganda website titled “Stronger Futures”—that coincidentally looks a lot like the Salt Lake Chamber’s tax modernization propaganda website.  Manipulate sales tax data presented to the public to bolster the governor’s and legislator’s arguments.

4. Take the propaganda show complete with fake data on the road in order to convince the public that the Republican generated tax imbalance justifies finding still more ways to tax the citizens.

5. Have the Republican governor call a special session of the legislature where Republican legislators quickly enact taxes on more things with the incidence of those taxes falling primarily on low and middle-income Utahns and on small businesses.  .

6. Bonus.  Collect campaign donations from big businesses and high income Utahns whose taxes will be reduced by tax reform and who will be able to socialize still more of their costs while privatizing still more of their profits.  Use those donations to defeat anyone who dares run against legislators who voted for this so-called tax reform.

Thus, Utah’s Republican governor and Republican legislators have created a tax crisis in order to justify still more taxes on the citizens of Utah.  And those new taxes will be paid primarily by low- and middle-income Utahns and small businesses. Big businesses will maintain their sales tax exemptions and continue to socialize their costs while privatizing the profits.  The uber-rich will benefit the most from any reduction in income tax rates.

So, unless Utahns take action to stop this, they will soon be paying more taxes in order to fund even more state spending, to further socialize big business costs and to reduce income taxes paid by the uber-rich.

Federal tax reform resulted in the state of Utah realizing sharply increased income tax revenue from low- and middle-income Utah families.  This occurred because, as reported by the Salt Lake Tribune “Federal reforms in 2017 eliminated the $3,038-per-dependent state tax exemption that helped lower tax bills for Utahns earning up to about $150,000. As a result, lower- and moderate-income households that benefited most from the tax credit will pay more in state tax.”

Republican legislators and the Republican governor knew that this was the case but elected to retain most of the increase in income tax revenue by refusing to fully reinstate the dependent state tax exemption as neighboring Idaho did.  Utah Republicans did reduce the income tax from 5% to 4.95% but that primarily benefited high income earners and corporations while leaving Utah families who lost the dependent exemption to pay more.

In fact, according to the Utah Foundation:

“The federal income tax changes mean that lower- and moderate-income households benefiting from the Utah Taxpayer Tax Credit will pay more in Utah state income taxes. While the Legislature acted to reduce the windfall from the federal tax change by reducing the tax rate, the combined changes will disproportionately benefit the highest income earners.”  (Click here to read the entire report which includes specific examples of the impact on families).

According to a report by KSL TV:

Then, in October, lawmakers were warned again. A legislative fiscal analyst said even with that new credit, state taxes were about to skyrocket, in some cases more than $1,200 for larger families.

So, Republican legislators and the Republican governor stuck it to families in order to inflate income tax revenues.

At the same time they were increasing income tax revenue, the Republican legislators and Republican governor drove down sales tax collections by using tens of millions of dollars of new revenue from internet taxes to provide sales tax breaks for privileged, undisclosed businesses.  In addition, they didn’t include the remaining projected sales tax revenue on internet sales in their propaganda presentations in order to maintain as wide as tax imbalance as possible.  According to a news report:

During a special legislative session in 2018, lawmakers earmarked roughly $55 million to manufacturers. It’s money the state is expecting to get beginning Jan. 1, 2019 from out-of-sate online sales tax collections.

Legislative Research and General Counsel Office records show the companies that got the $55 million are grouped under the title of “Machinery, Equipment or Parts.” That’s as specific as it gets. In fiscal year 2016, they got $122 million in tax exemptions. Dabakis says the $55 million was added to that this year to offset the increase in soon-to-be online sales tax.

If that weren’t enough, Republican legislators and Utah’s Republican governor have given certain businesses a total exemption from sales taxes on goods produced in the state but sold to purchasers out of state.  Because of Utah’s large positive trade balance, this further reduces sales tax collections and makes the tax imbalance even larger.