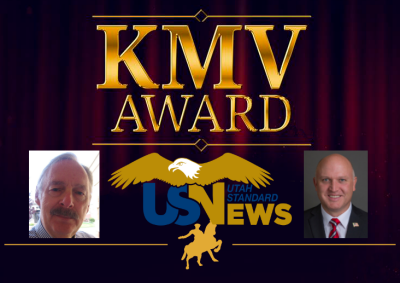 “Keep My Voice” (KMV) awards went to two local WashCo residents, Ed Wallace/UtahStandardNews.com and Travis Seegmiller, for their outstanding efforts to promote measures that protect voters’ constitutional rights. KMV was launched in 2013 by local Utah citizens concerned with the Count My Vote (CMV) flawed initiative to eliminate the caucus system and the subsequent Senate Bill 54 passed at the state legislature. The matter is now before the Supreme Court and is expected to be declared unconstitutional. The SCOTUS Amicus Briefs can all be read here on KMV’s website. Both Wallace and Seegmiller have made a significant and positive difference in that effort. (See REPORT: Count My Vote (SB54) – The Story So Far)

What began as a response to a growing public awareness by Utah’s ultra-rich to maintain their stranglehold on Utah’s citizens has turned into a full scale push-back. Up until recent years, there was little opposition to the power of the deep state. Now, they couldn’t even get their initiative on the ballot last November despite spending millions and lying in their attempt to get citizens to sign their failed initiative. KMV is now the largest gathering of conservative and constitutional policy activists in Utah’s history. (See related article – KMV Awards: The Anatomy of a Miracle)

Ed Wallace and Utah Standard News won the KMV Award for most accurate journalism and “Utah’s Best Print Media”. Wallace is the creator and publisher of UtahStandardNews.com and is a staunch advocate for the return of the proper role of government and a defender of the Bill of Rights. Wallace, along with St. George attorney Larry Meyers (Liberty Law Firm) and Jake Albrecht (Flitch Creative), began publishing USN two years ago and has printed over 26,000 articles, reached over 100,000 readers, and is the only Utah-based media that covers the entire state in addition to reaching all 50 states and over 130 countries.

In presenting the award, Dave Bateman, founder of KMV, said “Nobody else does what he does.” Wallace has been called a “Utah treasure”,  ”the Breitbart of Utah” and “one of the few journalists left in Utah.” Julie Blaney states “The vast work Ed has done in our state and county is mind boggling! He has shed light on hidden topics that would have remained secret, and because of his articles, he has made a credible and respected name for himself and Utah Standard News.”  Travis Seegmiller has stated ““You are an exemplary man… You are such an amazing asset to our state and nation… You are the only one that even remotely captures the true story of what is happening.”  Phill Wright, Executive Director of KMV, says ““By far, the most thorough, in-depth and fair reporting I’ve ever seen.”

Utah State Representative Travis M. Seegmiller, HD62 (Washington City, St George), received the “Rookie Legislator of the Year” award for his ongoing efforts to build a truly Conservative voting block of legislators up at the State Capitol while also focusing on preserving citizens’ Constitutional rights and freedoms at every turn. The state’s next General Session of the legislature begins on January 28th, 2019.  Since he was chosen by WashCo HD62 delegates and then swiftly appointed by the Governor in early 2018, and later upon winning his recent election by earning over 10,000 votes, Seegmiller (and his voting record) was ranked by the statisticians as among the “Top 4” House Members who voted “NO” the most to bills encountered on the floor of the House Chamber.

With a political philosophy that is grounded in small, frugal, non-intrusive government, very low taxes, utmost respect for local sovereignty and local decision making, and a shunning of unfair redistributive methods such as “false philanthropy” and “legal plunder”, it is no wonder that after less than a year on the job that Utah Grassroots ranked Seegmiller #1 out of all Utah legislators in their 2018 “Lifetime” rankings of Utah’s most Constitutionally Conservative legislators. In short, the data shows already that Representative Seegmiller is accomplishing what he promised to accomplish for the citizens of the state of Utah, and in a Big Way

Seegmiller has no intention of being a “rubber stamp” or becoming an “Activist Legislator” that pushes a misled progressive agenda. He says that he would rather repeal or repair bad existing laws than work to bloat the government more by passing more unnecessary legislation to burden the citizens of the state. For this, he will be labeled an obstructionist by some radicals, a moniker he happily wears as someone who consistently votes NO to unConstitutional power grabs and overreach that would increase the size and breadth of government.  Earlier this year a local reporter interviewed Seegmiller about whether he supported gun control laws. His answer was swift and decisive and tell-tale of the kind of leader he is. He made it clear that he is totally opposed to all attacks on our Second Amendment rights, and was quoted as saying “I will be there at every turn to fight to protect our Constitutional rights.”

Representative Seegmiller is arguably the most qualified person that has ever served in Utah government. His resume, click here, is staggering in terms of experience and expertise in the areas of leadership, economics, business, government, policy and Constitutional rights.

A rare conservative professor who teaches the U.S. Constitution, law, economics and leadership at Dixie State University, Seegmiller came out of the gate swiftly to fight for smaller government, lower taxes, in favor of Utah’s representative neighborhood caucus system, and especially in defense of Constitutional rights and liberties. Seegmiller quickly teamed up to form an informal “Cost Cutting Coalition” of other Fiscally Conservative legislator allies; he pushed rapidly to stop dangerous left-wing efforts; and he solidified his support among policymakers for budgetary priorities that would require huge surpluses to be given back to the taxpayers (Imagine That!), or to be used to pay cash for existing projects, thereby avoiding bonding or going into debt; and, to fully fund new rainy day funds. State leaders recently decided to do just that, as they are now going to pay cash for much of the expensive prison project up north and they are shoring up our state’s rainy day funds in light of the large existing surplus.

Given his track record, going into the 2019 General Session Seegmiller has been assigned again to some important Committees.  He will continue to sit on the state’s complex Social Service Appropriations Subcommittee, providing oversight and budget guidance to one of the state’s largest appropriations budgets.  And he has been added to the House Judiciary Committee which will tackle many sizable policy projects this session, a feat that is right up Seegmiller’s ally due to his work experience as a staffer on the U.S. Senate Judiciary Committee while he attended law school. Furthermore, Seegmiller will continue his work on the House Government Operations Committee in 2019, which efforts the liberal media has scrutinized since his first few days in office due to his constant attention to preserving voters’ Constitutional rights. Stay tuned to see what Seegmiller will accomplish over the next 45 days as the next legislative session unfolds, beginning on Monday.

Note:  Seegmiller continues to offer free, ongoing Constitutional Workshops for people of all ages in his legislative District #62.  He provides free copies of the U.S. Constitution for all interested parties; and he will continue holding “Listening Lunches” — public town halls or informal gatherings on alternate Saturdays during the legislative session. He can be reached at tseegmiller@le.utah.gov or on his cell phone at (435) 236-5118.