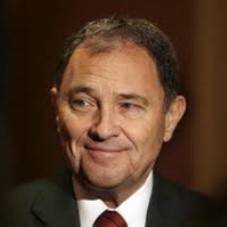 The Utah Republican primary race got a little nastier yesterday after it was revealed that Jonathan Johnson received another $250,000 donation from his friend and business partner of 14 years, Patrick Byrne. This brings the total amount that Bryne has contributed to Johnson’s campaign to at least $700,000, which is about 60% of the money Johnson’s campaign has raised. In itself, this is no big deal. But, as Governor Herbert finds himself on the verge of losing this race, every little bit of information can be spun as excrement to be flung against the wall while hoping that some of it stick.

Since Johnson soundly defeated Herbert by 10 points, 55% to 45% , at the Republican Caucus in April, Herbert ‘s behavior has been similar to a kite blowing in the wind trying desperately to keep afloat. His flipping on major issues such as Common Core and SB54 have raised eyebrows, even among some of his supporters. And, what started out as a discussion about policy differences has now turned into a mud-fest about how the two candidates raise campaign funds, and from who….and rightfully so.

Bryne’s latest contribution to Johnson’s campaign has caused the Herbert campaign to question publicly what kind of influence all that money might be buying and is referring to Byrne as Johnson’s “sugar daddy”.

Herbert’s campaign manager, Marty Carpenter, stated : “It has become painfully obvious one man is trying to buy the governor’s office by running his employee and registered lobbyist and funding him at an unprecedented level.” Carpenter has also questioned whether it should be allowed for that much of Johnson’s funding to come from one source.

At the convention last April, Herbert stated: “This slash-and-burn approach to politics is exactly what’s wrong with the country today”. Now, Herbert’s campaign is showing Utah how “slash-and-burn” really works.

This kind of unsubstantiated allegation and innuendo made by Herbert’s campaign has moved this election year away from the usual noncompetitive and quiet pace and brought it down into another realm. Utah voters are being treated to a rare glimpse of the ‘how’s and why’s” of Utah politics.

Many see Herbert’s behavior as an ugly and pathetic attempt to hold onto power by doing whatever it takes and voters are witnessing some of the most manipulative, brazen and bizarre behavior that has ever been seen in an election. No one wins in a situation like this and the biggest losers are Utah citizens. We expect, and deserve better from our elected officials. Instead of reflecting Utah values, this campaign seems more at home in Chicago or New York.

They pick their target and then freeze it by personalizing it, and that then polarizes it. The target becomes isolated from sympathy and the support network can be cut off. They don’t go after institutions, they go after people because people hurt faster than institutions. This is a cruel way of doing things but it is very effective.

Ridicule is perhaps a politician’s most potent weapon. There is no defense against it because it’s irrational and infuriating and works to create fear and anger. It also becomes a key pressure point to force the opponent into concessions. If a negative is pushed hard and long enough, it becomes a positive because the public usually sympathizes with the underdog.

Of course, victory requires that the opponent lay down and then allows himself to be rolled over. This isn’t happening.

Johnson’s campaign is adamant that there are no strings attached with Bryne’s money and there is no evidence to the contrary. There is just the ‘seriousness of the accusation’. Johnson sees Herbert’s attacks as a reflection of how the Governor himself views donations.

Johnson said “I find this offensive and indicative of his attitude that donations do buy influence in the Herbert administration,” alluding to an incident last month when Herbert was recorded offering to meet with lobbyists in exchange for donations.

“Herbert personally told hired lobbyists that he is “Available Jones,” Johnson said. ‘Jones’ was a cartoon character that was always available for a price in the “Li’l Abner” comic strip, as long as the money is green.

Johnson has acknowledged Byrne’s contributions, but said his options are limited because donors are fearful they will incur the governor’s wrath if they support Johnson’s campaign.

“It’s hard to be a challenger,” Johnson said. “I’ve talked to many people, probably many who are clients of those well-heeled lobbyists, who said, ‘Jonathan, you need to win, I support much of what you’re doing.’ And when I say, ‘How about a check?’ they say, ‘I can’t, because when the governor sees my name on your donor list, the hammer will come down. I have contracts in front of the state. I have business in front of the state.’”

In referring to his relationship with Bryne, Johnson said “We agree on many things, but there are some issues where we do not see eye to eye,” Johnson said. “(Byrne) has not asked, nor would he ever ask me, for a favor in return for his donation.”

The Bryne family have been supportive of many Utah politicians including Orrin Hatch and Mia Love. In 2007, they contributed $4 million to a failed campaign that would provide parents with school vouchers to move their children to private schools.

“He (Bryne)… poured millions into fighting and losing an education ballot initiative,” Carpenter said. “When he lost, he responded by calling the vote an IQ test and ‘Utahns failed.’”

Many Utahan’s, including this writer, agree with him (Byrne).

As to Herbert’s ‘sugar daddy’ comment: Herbert has raised over $6 million in the past six years, mostly from his own wealthy establishment ‘sugar daddy’s & mama’s’. Considering his concern about Bryne’s influence over Johnson, one has to question the influence and favors Herbert’s contributors expect from him. Here are just some of the notable contributions from this election cycle to Herbert’s campaign:

The primary election is June 28. By-mail and absentee votes should start receiving their ballots this week.