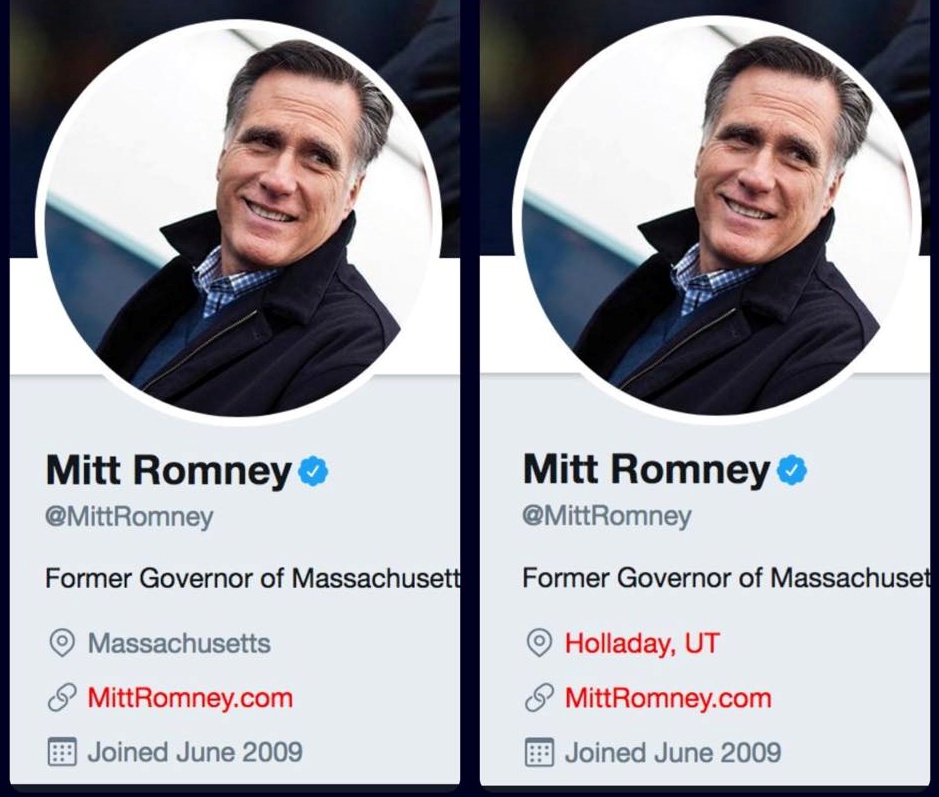 And, here in Utah, you can say anything to get elected, and few may care. That’s because Utahns are courteous. We really don’t know the other person very well and so we assume that the other person is telling the truth. Therefore, we extend to another person the benefit of the doubt by trusting and believing what they are representing to us. If anything, Utahans are trusting.

In the case of Mitt Romney, many support him based upon that thin layer of benefit of the doubt by trusting and believing his campaign slogans and statements because he appears to be a nice guy. And, he has nice hair. And, he’s a Mormon. Utahns love a Mormon who is a nice guy, with coifed hair.

So, when Romney finally announced his candidacy, this morning, for Senator of the Great State of Utah, Utahns were finally able to release our collective breath, that we’ve been holding for the past year. The question of “Will he, or won’t he” has finally been answered.

This political princess is using Utah to recycle his political career. In the words of our State Auditor ,John Dougall, “ a conversation, not a coronation” needs to happen. Romney is using his religious affiliation and money to take advantage of our state, to further his personal career and status.

Romney is the champion of bad politics and pretends to be conservative. Just take a look at his record as Governor of Massachusetts. That’s an agenda that we don’t need here in Utah. We need a Utahn to represent Utah. We need a person with standards at least as high as ours are. We don’t need a carpetbagger that disrespects and doesn’t support our President. Not that Trump is a great example of our values, but he is governing like a conservative, and he is not Hillary, he is our President.

A special report from FactCheck.org states: “Candidates have a legal right to lie to voters just about as much as they want. There is no federal truth-in-advertising law that applies to political ads, and the very few states that have tried such legislation have had little or no success.”

Let’s take a look at the man who thinks, and says, he represents us.

Many think that Romney is going to win a Utah senate seat because he has integrity. Yet, he will say anything to get elected, and has has a proven track record of “working with”  and capitulating to liberals.

Just take a look at what he did when he was Governor of Massachusetts. He appointed pro-gay rights and pro-choice state Supreme Court justices.  His wife donated to planned parenthood. And, in 2015, he finally took credit for creating a hybrid beast that Tim Pawlenty dubbed “Obamneycare, that eventually became Obamacare.

Conservapedia states: “Romney has been observed to not hold any values, instead being an opportunist who takes whatever political position suits him best at the moment.  He has voiced contradicting positions on topics as diverse as abortion, homosexual “rights,” illegal immigration, gun control and even support for Ronald Reagan and Donald Trump. Thus, with good reason, conservatives see Romney’s core beliefs as only marginally different from that of globalist Democrats such as Obama.

Romney had a pro-abortion record but has claimed to be “pro-life” since 2005. He acknowledges global warming but says that he doesn’t know how much is due to human activity. Romney has been criticized for standing behind his 2005 health care plan in Massachusetts whilst pledging to “replace” ObamaCare during his campaign for president in 2012.”

But, consider what Romney says now: “I am running for United States Senate to serve the people of Utah and bring Utah’s values to Washington,” Romney, 70, wrote on Twitter. He also stated “Utah welcomes legal immigrants from around the world. Washington sends immigrants a message of exclusion. And on Utah Capitol Hill, people treat each other with respect,”

Romney’s Fight for the Little People 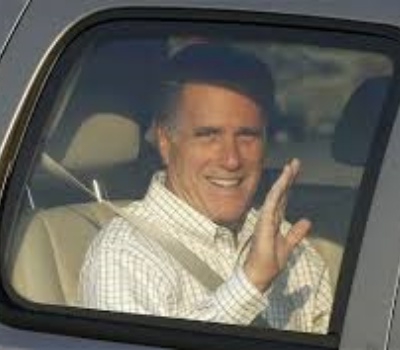 All of the people with dirt underneath their fingernails, who use their bodies to eek out a meager living and who don’t get to take power lunches, who have illnesses and are losing their houses because they can’t afford to pay their medical bills, who are self-employed and are taking it in the “shorts” because of the high taxes and excessive government regulations, and the hard-working middle class Americans who make this country great…despite all the restrictions and taxes and the task masters who make it difficult for us to feed our families, we will all have less liberty and freedom. Why? Because Romney is an entrenched globalist.

Hasn’t Utah had enough of the nice guys in politics who advertise they have integrity while they have their hands in our wallet so they can fund their causes and make sure their families and the people who are friends and buddies are taken care of?

As long as politicians talk about morals and they’re nice religious guys, that’s all that matters too many, even when that guy is squishy and with zero integrity. Many people don’t want to look at that part of them. Many do not like thinking badly of others, even when they are more than justified in doing so.

Mitt Romney couldn’t even stand up for the Mormon religion. He wasted a great missionary opportunity to tell the world that God still speaks to prophets. That God just didn’t leave us hanging here in this very difficult world to live in with all the problems that we have. That God still speaks to us today is a great comfort in our life. And, many people who watched his interview where he said the last time God talked to man was when Moses was in the bush, would have liked to know that God loves us just as much as he loved people who lived in the Bible and that God has guidance for us. Mitt Romney is a very poor example of what a Mormon should be.

Romney despises Trump and the only time he can speak kindly to, or about him, is when he wants something. Romney had great praise for Trump when Trump was shoveling Romney money for his 2012 campaign, but apparently that was a another Romney.

In a 2016 speech, Romney called fellow Republican Trump a “phony, a fraud,” who was “playing the members of the American public for suckers.” He came out hard against Trump because Romney is establishment through and through.

What has Romney done for Utah compared to what Trump has done? Utahns celebrate Trump’s appointment of Justice Gorsuch. We applaud his choice of Interior Secretary. We support his actions on coal, oil, and gas. We support shrinking the Bears Ears and Grand Staircase monuments. We want Utah to have a strong say over its own lands, especially those lands that remain public.

And, when it comes to Hillary’s foreign policy agenda—– regime change in Libya, no fly zones in Syria, stumbling back into the Iraq quicksand, punching Putin in the nose, pivoting to China to rag about its sand bars in the Spratly Islands and much more—–Romney is completely in sync. He’s a neocon echo chamber who has not the slightest grasp that the Washington War Party is ransacking the world and bankrupting the nation.

Romney & Count My Vote and the Caucus-Convention System

Romney doesn’t even understand the constitution and supports Count My Vote. He is considering to go the Caucus-Convention route, but chameleons can turn on a dime. GOP insiders think Romney will want to pursue the Caucus AND signature primary route. Otherwise, he would have to run against a convention nominee which might be a source of embarrassment for him.

Maybe, he’ll do caucus only to help CMV get signatures at the caucus and convert the delegate pool to moderates who will get rid of the caucuses all together. If Romney wins the caucus they get a rubber stamp of a very moderate candidate. If he doesn’t win at convention, they will use it to evidence that delegates are out of touch with the general populace because they assume that Romney will blow anyone away in the primary.

Utah wants a senator who understands constitutional republic government; who understands that the federal government needs limits, oversight, and fiscal responsibility. Some people think, because Mitt Romney is running, that Utahns have already decided who our next senator will be. That might turn out to be true, but after 42 years with Senator Hatch, maybe we should take a minute to think through what we want from our next senator.

Romney is not a good choice for Utah.

Romney’s ‘Super Fraud’ Business Chops – Can We be Honest ?

Romney was never really a businessman at all. He was an LBO strip-mining artist who rode the first Greenspan Bubble to riches between 1987 and 2000. Yet in the overwhelming share of the 77 investment deals he oversaw during that period, he left behind financial cripples, zombies and Chapter Eleven bait.

During his 16-years at Bain Capital, fully one-fourth or $600 million of the firms cumulative $2.5 billion of profits were scalped from companies which went bankrupt soon after Mitt and his partners got out of town with the loot.

And that gets us to the plain scandal of Romney’s record at Bain Capital. The net of it was itemized in a detailed expose by the Wall Street Journal prior to the last election. During Romney’s 16-year tenure as head of the Fund, Bain invested $1.1 billion in 77 deals and generated the aforementioned profits of $2.5 billion.

But as the WSJ analysis documents, nearly 90% of these deals produced meager returns. And the ten deals that resulted in big time gains—-and nearly 75% of the profits—- have virtually nothing to do with business acumen. Actually, they stunk to high heaven.

As indicated, the overwhelming bulk of the deals—67 out of 77—were no great shakes. These 67 companies ended up leveraged to the hilt, but the returns to Bain and its investors were actually lower than what a passive S&P 500 indexer would have earned even without the risk of leverage or paying all the private-equity fees.

Newsweek says “Mitt Romney was not a businessman; he was a master financial speculator who bought, sold, flipped, and stripped businesses. He did not build enterprises the old-fashioned way—out of inspiration, perspiration, and a long slog in the free market fostering a new product, service, or process of production. Instead, he spent his 15 years raising debt in prodigious amounts on Wall Street so that Bain could purchase the pots and pans and castoffs of corporate America, leverage them to the hilt, gussy them up as reborn “roll-ups,” and then deliver them back to Wall Street for resale—the faster the better.”

So the jobs creator wasn’t all that, and as a politician he was far worse. Romney’s disastrous campaign in 2012 is exactly why the nation had to endure four more years of the Obama White House’s feckless tampering with our already feeble economy; and why he bears the complete responsibility for the fact that  Obama further packed the Fed with even more extreme monetary cranks and Keynesian money printers.

No wonder the American voters did not believe him when he claimed to be the “job creator”!

I have a feeling that I’m going to writing a lot more about Mittens. Not because I hate him, because I love Utah and want to be represented by someone I can trust and who shares my values