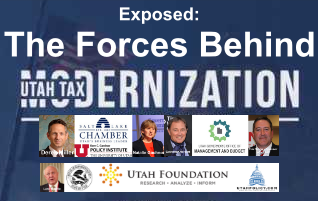 Analysis: Who was the major driving force behind the sales tax on services initiative?

Dr. Mortensen is a co-founder of CitizensForTaxFairness.org

Question: – Who was the major driving force behind the sales tax on services initiative as reflected in HB441?

The Enemy of the Taxpayer, Salt Lake Chamber, in close coordination with Governor Gary Herbert, orchestrated the Tax Modernization effort as reflected in HB441 by using its full range of front groups, fellow-travelers, lobbyists and a specially created tax modernization website.  Tax Modernization, as defined by the Chamber, includes a sales tax on services accompanied by a cut in the corporate income tax which allows its big business members to continue to socialize their costs by shifting even more of their tax burden onto low and middle income Utahns as well as onto small businesses while privatizing their profits.

A Chamber Press release issued on December 14, 2017 stated:  “Over the past several decades, Utah’s sales tax base has been eroded due to changing purchasing patterns, the digitization of goods, legislated exemptions and remote sales.”  Lane Beattie, the Chamber President and CEO at the time said:  “Now is the time for tax modernization…. Relying on the same old tax code just won’t cut it.”  The Chamber’s press release further noted that “The [Chamber’s] campaign will seek to make this issue extremely visible with the public and help people understand the need to modernize our tax code, and encourage the legislature to take action this coming session….For more information on Utah Tax Modernization visit, http://utah.tax/”

According to the Chamber’s Utah.tax website, “Expanding the sales tax base to services and removing previously-passed exemptions would improve stability and level the playing field, while also allowing for flexibility for business-to-business transactions.”

When the House of Representatives finally released its sales tax on services bill, HB441 on February 27, 2019, the Chamber quickly issued a press release in support of it.  Derek Miller, Chamber President and CEO and Governor Herbert’s former Chief of Staff said: “As Utah’s ‘Voice of Business,’ the Salt Lake Chamber supports the Utah Legislature taking bold action to implement an updated, balanced approach to Utah’s tax policy.”

In addition, “Tax Modernization” is listed as the Chamber’s top priority under the category of Business Climate.

The Chamber received substantial help from affiliated organizations that provided the “empirical” arguments for expanding the sales tax to include services.

In June, 2018, a Utah Foundation study addressed the increased expenditures on services and concluded that If Utah broadened the sales tax base to include all personal consumption transactions, “the state could drop the effective rate to 2.1% (from 6.2% currently) and generate the same amount of revenue.”  The Chamber’s CFO is a member of the Foundation’s Board of Trustees.

Utah Policy parroted the Chamber’s talking points, published its press releases verbatim, and pushed out the studies completed by the Utah Foundation and Kem C. Gardner Policy Institute.  It also commissioned and then reported on a poll that found strong public support for broadening the sales tax base.

In November 2018, the University of Utah’s, Kem C. Gardner Policy Institute released the study that is the source of much of the information on the Chamber’s Tax Modernization website.

Governor Gary Herbert  has a long history of taking Chamber policies and making them his own.  In this case, the Kem C. Gardner Policy Institute gathered much of its data from the Governor’s Office of Management and Budget.  The Chamber and the Governor then took the Gardner Institute study and used it to build their case for Tax Modernization based on a sales tax on services.

The Utah House of Representatives eventually put up its own web page on Tax Modernization.  However, it does nothing more than repeat the Chamber’s, Kem C. Gardner Policy Institute’s and Governor’s talking points.  It then links directly to the Chamber’s Tax Modernization website. Once HB441 was made public, the Chamber quickly issued a press release in support of the House bill.  In addition, it had its Vice President of Public Policy and Government relations, who is now the chief of staff for House Speaker Brad Wilson, speak in favor of HB441 during a House Committee hearing and the Chamber lobbied legislators to pass the bill.

It was only when Chamber members, who are not part of the Chamber’s big business inner circle, finally caught on to what the Chamber was doing that Derek Miller, the Chamber’s President and CEO, backtracked and issued a new press release calling for HB441 to be pulled.

So, just as all roads used to lead to Rome, in Utah all roads on the sales tax on services lead to the Salt Lake Chamber and to the Kem C. Gardner Policy Institute and their leaders, Derek Miller and Natalie Gochnour.

Note: All images were cropped from screenshots.