Mitt Romney, conservative and protector of the little people, said a whole lot of nothing yesterday about his stance on guns. “I don’t think we can just wait and hope things like this are going to stop of their own accord,” he said. “We can’t just sit and wait and hope and expect things are going to get better.”

Romney thinks that one possible solution to hate and evil is Hatch’s proposal for enhanced background checks prior to selling someone a gun. Romney’s opposition thinks there should be extensive background checks on a politician’s knowledge of the Constitution and Bill of Rights, as well as their own intentions for running, before they’re let loose on the streets to run our lives.

Romney said that he would support regulating bump stocks. (Because bump stocks kill people?). Apparently, there is a line-in-the-sand concerning how many people can be killed by a gun, and how fast, that he is formulating an opinion about. What’s next: Spoons? Rocks? Cars? Gravity? 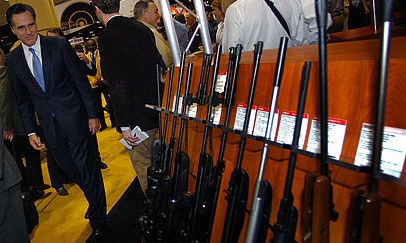 He also thinks there should be school building security measures, including volunteer patrols. And, high on his list, are “intervention teams” that would go into, or be stationed, in the schools to take a student who is behaving badly, and on the verge of creating mass murder, into a safe zone where they can be reassured they are loved and respected.

I’ve got an idea: Why not arm and train teachers, and even students, and give them the expertise and ability to defend themselves? After all, they’re usually the ones being killed by their fellow students. Why not even-out the battlefield instead of barring guns in gun-free zones that bar the Constitution and Bill of Rights? That should be allowed. Oh wait, it already is. I think there’s even a law already in place.