Hey Utah… Got Radiation? If the Utah House gets their way – You Will! 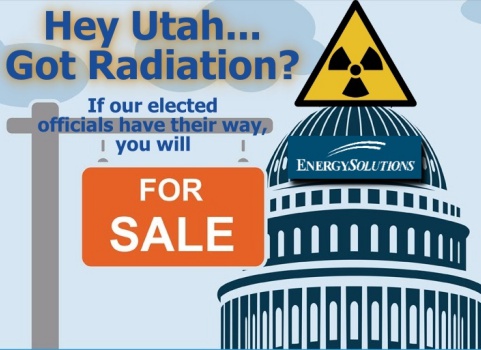 Hey Utah… Got Radiation?
If the Utah House gets their way – You Will!

Why would a State Representative (Carl R. Albrecht HD70-Sevier County) sponsor a bill that benefits one specific company based in SLC who has a facility in Grantsville (176 miles away)

Why would State Senator Scott D. Sandall (SD17) be a Floor Sponsor to allow America’s most radioactive waste to come to Grantsville and be stored just 30 feet above the water level?

Are their constituents clamoring for this? Did either of them make this a platform campaign issue? Did either of them expose their true intentions when they ran in the last election? Did the infamous Utah Policy conjure up a new poll that shows that Utah residents are 85% in favor of bringing “glow-in-the-dark” piles of deadly waste INTO our state for all eternity? This writer doubts that there are 85 people in Utah, beyond those who stand to profit, who would support this.

Their bill, HB220, Radioactive Waste Amendments, would effectively eliminate the current ban on the disposal of class B and C radioactive waste in Utah. The bill obviously intends to ignore public safety, health, and state law, to accommodate ONE private business interests: EnergySolutions, LLC.

In a statement, the Sierra Club said “This bill would make it easier for EnergySolutions’ proposal to permanently store up 6,000 tons of DU at its Clive facility in Utah’s west desert with quick approval. This is a blatant attempt to undermine the state’s pending Safety Evaluation Report, because EnergySolutions knows that their site is inappropriate for the disposal of Depleted Uranium. Now they’re trying to change the rules of the game at the eleventh hour — this is nothing more than a hail mary.”

We’ve learned that there are 750,000 tons of uranium waste that is currently sitting in 2 other states that don’t want it, so EnergySolutions wants the contract to bring it all to Utah. It seems ludicrous that anyone would vote to stockpile 750,000 tons of VERY DANGEROUS Depleted Uranium from Kentucky and Ohio which will be trucked over our roads and railways right through the very heart of Utah.

This isn’t EnergySolutions first attempt to bring hazardous nuclear waste into Utah. As recently as last October, they were denied a request by the “The Waste Management and Radiation Control Board” of Utah for an exemption “from the rule that requires EnergySolutions to prepare a performance assessment that demonstrates the proposed disposal of depleted uranium would meet the performance standards required by the rules.” see https://documents.deq.utah.gov/waste-management-and-radiation-control/board/DRC-2018-011751.pdf

“HB220 gives the Director of the Division of Waste Management and Radiation Control Board (DWMRC), a political appointee, the authority to permit the disposal of waste that wouldn’t be allowed under the state’s current class B and C radioactive waste ban. Further, HB220 would allow radioactive waste to be classified solely at the time of disposal rather than based on the potential long-term impacts of waste storage. This would have the greatest impact on classification of unique waste streams, such as depleted uranium, that increase in radioactivity over time.” See here

So, EnergySolutions is more or less attempting to run their own legislation and it passed the House with little opposition. There was just so much illogical support for this that there must be a back-story.

So, why are a handful of people putting up a huge fight to get this nonsense law passed? And, why did EnergySolutions spend millions to have their name plastered on the most visible event center (currently the Vivint Arena) in the state from Nov. 20, 2006 until Oct. 27, 2015? The company doesn’t offer any service to the average consumer and sells nothing. There is no comparison to the Mercedes-Benz Arena in Atlanta or American Airlines Arena in Miami or even the Maverik Center in West Valley City that all attempt to generate good-will and advertise their products.

In a no-sense situation like this, the easiest place to start looking for answers is to follow the money. Let’s take a look at the facts concerning EnergySolutions contributions to current and past elected officials and candidates. The following info is found here: https://elections.utah.gov/campaign-finance –

From 2008-2015, EnergySolutions made a total of 835 campaign contributions totaling $1,074,980. The contributions went to almost every elected official and candidate and did not stop at party lines. The following graph tells the story –

Interestingly, their campaign donations dried up in May 2015, the same time they didn’t renew their contract with the arena. This isn’t representation. It sounds more like crony capitalism. Any questions?

Rep. Albrecht’s bill passed the House Natural Resources, Agriculture, and Environment Committee on a 12 to 1 vote on Feb 6. Yesterday, the bill sailed through the House with a 52-2-4 vote. It is currently in the Senate Natural Resources, Agriculture, and Environment Committee awaiting their vote. They are awaiting your call, text and eMail. Committee members include:

A political investigator for UtahStandardNews.com states: “We would suspect that Doug Foxley is somewhere to be found in, around and/or behind it. Foxley, as you will recall, was at the center of Herbert’s “I’m available Jones” and is one of Utah’s Goodfella elites. “Don’t bet on the horse. Bet on the rider.”  Herbert and his clansmen will be working in concert with Foxley to enable legislation that will serve their purposes as regards the above.

Doug has always been up to his ears in waste.

1 – Doug Foxley …”In addition to Strata Policy, the Utah Legislature also hired the New Orleans-based Davillier Law Group, which includes Utahns Frank Pignanelli and Blaze Wharton (both former state legislators) and Doug Foxley. According to the state’s lobbyist disclosure website, Pignanelli and Foxley are currently paid lobbyists for several companies that could benefit from state management of public lands, including Big West Oil and EnergySolutions. Wharton has, in the past, lobbied for Energy Fuels.” – City Weekly

2 – Stephen Douglas Foxley … “Foxley has been in this role in an advisory capacity since last year. Prior to formally joining Cambia, he served as an associate at Foxley & Pignanelli, a prominent Utah government relations firm where he provided clients in-depth political consulting and policy expertise. He has also held legal and financial roles at Woodbury Corporation and EnergySolutions.”  Cambia press release.