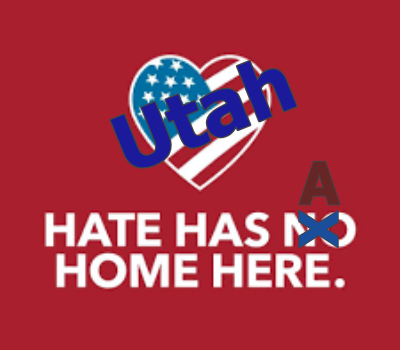 By Ed Wallace & the Utah Yaks

Folks, we have slipped into a whole new level of contention.

Earlier this week, Rep. Karianne Lisonbee (HD14) had to evacuate her family from their home under the cover of police protection due to threats from those angry about their conversion therapy language not passing. It was closer to Criminal Activity than mere bullying. She and her family required Police Protection! There have also been repercussions for other members of the House who expressed opposition against the Equality Utah (EU) language and other LGBTQ issues.

This is such a sad commentary on the true state of heart of the players here. EU would not negotiate in good faith and then they bitterly complained when they didn’t get the outcome they desired – even though the outcome was indeed major progress that moved the needle in the right direction.

Rep. Lisonbee was absolutely sterling in the way she chaired the meeting and was sobbing on the House floor earlier this week during the Hate Crimes debate because she was a victim.

(The hate bill passed the House 64-9. It was expected to fail, but was then amended to also enhance the criminal penalties for hateful acts attacking “Political Expression”. Because of the recent attacks on House members, that last ditch amendment won over 15+ votes in the House. It is alarming that we are punishing people based on what someone thinks they were thinking during the attack. While most agree we can all be more kind, we do not think anyone needs special laws or favors. Most of us can live with the simple Golden Rule: “Do unto others as you would have them do unto you.”)

The fact that Rep. Lisonbee is being brutally harassed by hate filled radicals is proof positive that she stood courageously for what she believes is right and has become a hero to Christian conservatives on this and the pro life issue.

Other House members have also been on the receiving end of nasty vitriol from a specific audience of disenchanted people. These people are largely misinformed and rely on purely emotional anecdotal evidence versus the truth. Their strategy includes trying to harass the Christian Conservative legislator out of office, such that the Cost/Benefit analysis of whether to remain a Legislator no longer makes sense to the  Lawmaker, due to the hate and anger and disturbing vitriol that pours down upon the lawmaker who dares oppose the FAR left radicals.

HRC- Equality Utah hopes to bankrupt their opponents.The LGBTQ community is carefully organizing against these conservative leaders and using whatever means and mechanisms necessary to guarantee that they could never be reelected. Whether their tools be Character Assassination, Reputation Pillaging, Personal Threats to Life and Limb…..they will stop at nothing to destroy those who oppose their agenda. The details of harassment against their families are ugly and the Right must rally around those lawmakers who are their Standard Bearers, if we want them to stay in office, because the opposition is grand in scope and ugly and fierce.

We witnessed this same vitriol  from the same mindset during the ERA battle of the 1970s. The LGBTQ battle is the most fierce and ugliest of all. One conservative activist stated “Over the years I’ve had my life threatened, a swastika spray painted on my driveway. Tires slashed. And been called every vulgar title a woman can be called.”

Another conservative commentator stated “Liberals are without a doubt the most hateful, bigoted, intolerant and violence-prone people in this country. They are all the evil things they claim we are but are not. Conservatives do not descend to their level. It is ludicrously ironic that the people who were dishing out the hate were the same ones begging to give them a customized hate bill that protected THEM but no one else. So they could keep hating, but nobody else can hate them back.”

The problem with the conversion therapy bill was that it was branded as being against electrocution-shock therapy of minors, and Equality Utah went to great lengths to line up enough supporting votes. Basically, it was marketed as a ban on electrocution of minors against their will with a long line of minors trotted out to discuss the uncivilized nature of the therapy that leads to much higher rates of suicide, and other bad things. So THAT was the narrative, but then the bill actually went way further and banned all sorts of therapies (not just shock therapy) that seek to help the minor retain their original gender, or etc.

So the shock therapy was the trojan horse used to crack open the whole social system, and most were angry about it. Constituents don’t get it; they think it’s only about electrocution therapy (and what civilized person wouldn’t oppose that cruelty!) House members hope they will have the chance to try and peel away some of those overreaching provisions to turn it back into a shock-therapy-only bill. In sum, Equality Utah asked for too much and sank their own ship and has become an arrogant and destructive force in Utah politics.

Shock therapy was used as a Pavlovian way to change gay men into men who are attracted to women. BYU Bishops for many years referred men to have this treatment as part of their repentance process when they would confess to having feelings for men. Today, psychologists are into talking through traumas for years and years without decent results – just 38% of their clients achieve recovery after 600 psychoanalysis sessions. More promising is Behavior Therapy with 72% recovery after 22 sessions and Hypnotherapy with results of 93% recovery in 6 sessions. Everyone should get the best results when they are struggling with their abuse or identity issues.

Equality Utah surely gets much of their strategies from the UN. What happens at the UN, used to come to us slowly and in degrees…. now it can happen immediately. One of the most dangerous assaults on the family ever at the UN is underway.

A transgender resolution intended to destroy any distinctions between men and women was just released by South Africa at the UN Human Rights Council. Negotiations on this resolution are underway right now in Geneva. It could be tabled as early as today and voted on and adopted Friday. Under the guise of eliminating “discrimination against women and girls in sport,” this resolution does the opposite. It discriminates against women and girls in sport by insisting that gender-confused men and boys who want to compete as women and girls, despite their physical advantage, must be allowed to do so. From Catholic Families: “We have just learned that the South African government has proposed a resolution at the Human Rights Council that will define biological boys as girls and require biological boys be allowed to invade girls’ sports, girls’ locker rooms, girls’ showers.”

“The Davis County Republican Party would like to speak out strongly against the threatening, bullying, vitriolic and highly offensive tactics used against Utah State Representative Karianne Lisonbee and other legislators on the Judiciary Committee. These emotional and anecdotal responses are not only offensive but dangerous to a society who believes and values representative government, our First Amendment rights and our Constitution as a whole. There is an appropriate way to protest against actions deemed undesirable in both your right to petition and assemble.

In addition, there are others ways to participate in the legislative process. This in no way includes hate mail, threats of any nature, bullying and intimidation. Misleading media coverage is also harmful and detrimental to our freedoms! We implore responsible citizens to arm themselves with information regarding not only the issue at hand but the processes of representative government.

In addition, we call upon the media to be a beacon of truth, rather than biased reporting based on a preferred political agenda. Report the truth and let the people decide. If an elected official votes in a way you deem to be undesirable there are more effective ways to have your voice heard. Ultimately, you can petition other people to run for political office and help them.

Lastly, we see these efforts as part of an agenda to silence certain people who believe differently and to discourage some citizens who seek public office. These tactics are un-American and must stop. We call upon citizens of Utah to oppose this leftist trend through reasonable measures and to refrain from participating in any tactic that resembles such efforts. We would like to extend our support and appreciation to Rep. Lisonbee and all elected officials who work in behalf of Davis County and The Great State of Utah!”