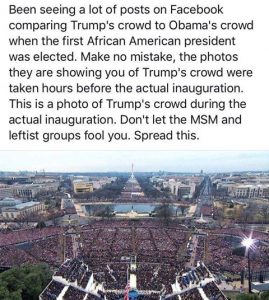 A friend of mine posted this picture this morning. It disturbed me. The left and the media are going to use every news story and event as an opportunity to destroy Trump. There has not been, nor will there be, a honeymoon. There will only be the whining, incessant complaining and nastiness that characterizes and personifies a toxic person in a dysfunctional relationship. Imagine waking up next to this every morning for the next four years. As Trump would say… ‘O yoi yoi ‘.

They will somehow find and invent a way to distort and falsify reality by utilizing deliberate propaganda, blatant lies and incomplete truths to create a virtual and simulated artificial reality that eliminates the truth.

Who are ‘they’? They are the losers of the 2016 election, the media, various government agencies, such as the CIA and Department of State, as well as political and private groups, that have apparently all worked together to undermine and destabilize our democracy and interfere with Mr. Trump assuming office. They are the establishment. They are part of the fabric of America. They are the cancer in America. In reality, they are the dregs of society and the ultimate definition of a narcissistic socialization movement.

Unlike his predecessor, Trump is more of an egoist than a narcissist. His ‘Make America Great Again’ and ‘America First’ are exactly what our country needs to counter the affects of the socialist influence for the past 140+ years. We can’t eliminate the Second Amendment but we can do our part by ignoring and eliminating them from our lives, including the highly certified mainstream ‘fake news’ media. Think of them as the companion illusions of John Nash in ‘A Beautiful Mind’. They will always pop up but they will no longer influence and control… unless we let them.