There’s a meme quote by grunge rocker Kurk Cobain circulating around as fact. 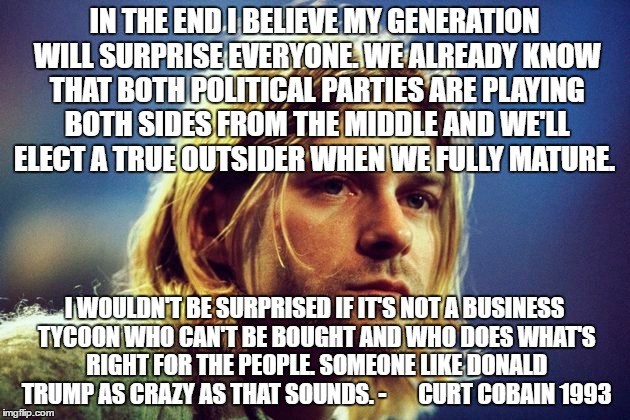 This doesn’t sound like the same Kurt Cobain that I’m familiar with. While I have absolutely no respect for Snopes, they do say “This quote appears to have originated with the ‘Trump Train’ Facebook post of 30 July 2016. The ‘Trump Train’ Facebook page didn’t provide any information about where Cobain allegedly made this prediction (e.g., in an interview, as part of a television appearance, during a concert) and noted only that he supposedly uttered it sometime in 1993”.

TruthorFiction.com mentions a similar quote: “My generation’s apathy. I’m disgusted with it. I’m disgusted with my own apathy too, for being spineless and not always standing up against racism, sexism and all those other -isms the counterculture has been whining about for years.”

All of the usual suspects, including Buzzfeed (washing my mind and fingers with soap), say it isn’t so, although Snopes does say they couldn’t prove it with absolute certainty but were highly suspect. Their opinion reflects in the ‘liberal’ rock n’ roll media.

Other outlets refer to ‘Trump Train’ as the source and are running with it as a fact. YourNewsWire.com cites and links to a site ‘Cooltobeconservative.com’ as their source but the link goes nowhere. A FB site of the same name (CoolToBeConservative) has some wonderful, scrumptious looking recipes and over 13k ‘conservative’ memes, but no visible Cobain quote.

Eternal Affairs Media says “It is possible that Snopes didn’t find the quote that truly does exist or worse case scenario they may have been paid off by The Clinton Foundation like has happened before. MAKE YOUR OWN CONCLUSIONS ON THIS ONE”

On a hunch, I looked at Cobain’s dairy and found these quotes:

– “I like to complain and do nothing to make things better… I consider myself to the extreme left”.

– “I like to infiltrate the mechanics of a system by posing as one of them, then slowly start the rot from the inside of the empire”.

– “No amount of effort can save you from oblivion.”

I could not find anything that even remotely resembles the quote that is the focus of this article.

If  Corbain were alive, he would probably hate both Trump and the political establishment. It also sounds fishy that he would think of a business tycoon as someone who couldn’t be bought.

Another quote beginning to make the rounds is from Martin Luther King: “Donald Trump is America’s greatest hope for the future.” In 1967, Trump was 21 and into beautiful women, outrageous clubs and fancy dinners. But, the quote sounds really, really credible. Let’s make it a fact and turn it into reality.

The war for our minds is supported by both sides. It is not limited to the liberal media. Seeking a return to a righteous and just society without truth or character is like seeking health without nourishment and can only be assured by virtuous behavior.   Samuel Adams warned that “public liberty will not long survive the total extinction of morals.” The peddlers of propaganda and fake news should take note.

I’ll stick with the old adage, ‘If it quacks like a duck…..’ until someone presents proof that it really happened. To my knowledge, there are no interviews, recordings or anything else that prove it did and I have better things to do.