SCOTUS Marriage Decision: A Date Which Will Live in Infamy 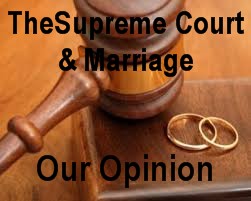 Today is a date which will live in infamy. Today the United States Supreme Court released their opinion on marriage. We support the traditional family, with one man and one woman. We believe that children have a right to have a father and a mother. To our knowledge, there is no other way for a child to be created except by one sperm and one egg. We believe that the greatness of our country lays within strong and cohesive families where parents raise their children together.

We contend that there is no requirement in the Constitution for government to be involved in marriage or the definition thereof. The 10th Amendment clearly stated and delegated power to the states to have the deciding voice in the creation of Constitutional laws.

Beginning with Adam and Eve, God defined marriage as a holy sacrament and showed the world His example of a healthy society. We believe that God designed life, man and woman, and He intended for children to be raised in families. Our government and Founding Fathers saw that God’s moral laws were good and adopted His laws as their own…. not the other way around.

For thousands of years, government has used Biblical definitions of marriage that have been accepted and practiced by all mankind. Most faiths believe that “marriage” is a religious union of two people and a Holy ritual. States should not be allowed to confuse one of the holiest sacraments with any function of government.

In general, most religions accept both the Old Testament and the Gospels and marriage as part of their culture, as are their beliefs about homosexuality. This includes the Islamic religion which, unlike Christianity, does not tolerate gays in their culture. Christianity is not the State religion (no religion should be) and we do not agree with the state inserting themselves into what is basically a religious tenet, and has been throughout the history of mankind.

We call upon them to refrain from using the term “marriage” and replace it with a legal ‘civil union’. This would remove any suggestion of religion by the state. Religious institutions ‘marry’. States should acknowledge same-sex unions or registered civil contracts. A license to ‘marry’ would be replaced with a license to form a ‘civil union’ and other government documents could reflect similar changes asking only if a person has a legal ‘civil union’, is single or divorced.

The Court was asked if states have the right to determine state laws and state Constitutional amendments that categorically reserved marriage only for one man and one woman. States have always decided for themselves when to yield to laws of other states. Same-sex couples want to change the definition of marriage, AND change the Constitution. The Supreme Court has exercised jurisdictional authority to do just that.

Justice Antonin Scalia penned his own decision to “call attention to this court’s threat to American democracy.” He views the opinion as an overreach by the court that goes beyond its role as a neutral arbiter to actually create policy.

Justice Scalia writes “Today’s decree says that my Ruler, and the Ruler of 320 million Americans coast-to-coast, is a majority of the nine lawyers on the Supreme Court.”

“This practice of Constitutional revision by an unelected committee of nine, always accompanied (as it is today) by extravagant praise of liberty, robs the People of the most important liberty they asserted in the Declaration of Independence and won in the Revolution of 1776: the freedom to govern themselves.”

We couldn’t agree more. We are a republic… not a democracy. Marriage is not in the list of enumerated powers of the federal government. Utah should not comply with this decision and nullify it if necessary. Our elected officials took an oath to uphold the constitution. We call upon them to do their duty. Now.