The Equal Protection Clause and Marriage 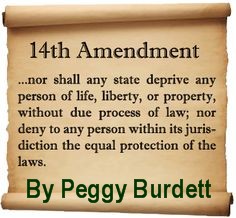 Does the Fourteenth Amendment to the United States Constitution prohibit a state from defining marriage as a relationship between one man and one woman?

The U. S. Court of Appeals for the Sixth circuit upheld the state’s bans on gay marriages in Kentucky, Michigan, Ohio and Tennessee. Kentucky. One of the common points in the four briefs is “The Constitution’s Fourteenth Amendment does not settle the definition of marriage, so that definition is left to the states.”

The Equal Protection Clause of the Fourteenth Amendment of the U.S. Constitution prohibits states from denying any person within its jurisdiction the equal protection of the laws. In other words, the laws of a state must treat an individual in the same manner as others in similar conditions and circumstances

Generally, the question of whether the equal protection clause has been violated arises when a state grants a particular class of individuals the right to engage in an activity while denying other individuals the same right. There is no clear rule for deciding when a classification is unconstitutional. In order for a classification to be found permissible under this test it must be proven, by the state, that there is a compelling interest to the law and that the classification is necessary to further that interest.

And what is the justification for DOMA (Defense of Marriage Act)? One stated reason is that the traditional definition of marriage codified in Section 3 fosters the relationships optimal for procreation thus ensuring stable generational continuity in the United States. The way humans procreate is through the union of a sperm from the male and an egg from the female. Procreation cannot be achieved through homosexual sexual acts. The second justification is that it encourages the creation of a stable relationship that facilitates the rearing of children.

“What remains is a debate about whether to allow the democratic processes begun in the States to continue in the four States of the Sixth Circuit or to end them now by requiring all States in the Circuit to extend the definition of marriage to encompass same sex couples. Process and structure matter greatly in American government. Indeed, they may be the most reliable, liberty assuring guarantees of our system of government, requiring us to take seriously the route the United States Constitution contemplates for making such a fundamental change to such a fundamental social institution.”

One of the cases challenging the constitutionality of the definition of marriage is a lesbian couple living in Michigan. Their initial complaint was against the adoption laws in Michigan, complaining that they violated the Equal Protection Clause of the Fourteenth Amendment. Each of them had adopted children as single parents and they both wanted to adopt the other partner’s children. The state moved to dismiss the lawsuit for lack of standing, and the district court tentatively agreed. Rather than dismissing the action, the court “invit[ed the] plaintiffs to seek leave to amend their complaint to . . . challenge” Michigan’s laws denying them a marriage license. DeBoer and Rowse accepted the invitation and filed a new complaint alleging that Michigan’s marriage laws violated the due process and equal protection guarantees of the Fourteenth Amendment.