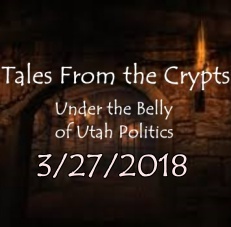 Steal the Delegates and Run

Let’s face it…. “Pristine” is not a word that many would use to describe Utah politics. Nor are many of our politicians and leaders “the light of the world” mentioned by Christ in His Sermon on the Mount. Actually, quite the opposite. Our political establishment, along with their partners in Utah’s mainstream media, continually find ways to lower the bar even further than it already is. They misrepresent, they distort and give incomplete information, filled with deliberate propaganda and falsehoods, and they avoid and hide the truth. They even go so far as telling us to “Count My Vote” as they work daily to undermine our democracy and our republic.

Someone transcribed the text of one of Rob Anderson’s UTGOP Chair campaign videos, titled, “Rob Anderson on the caucus system”. Read this paragraph from his video, and tell me how it compares with your caucus experience this year. Rob states, “The only negative regarding the 2016 caucus night preparations was on behalf of the Utah GOP. I know I’m not the only county GOP Chair who will attest to the dismal support provided by the Utah GOP leadership leading up to caucus night. I venture that that displeasure with the Utah GOP is unanimous among the 29 counties.”

The transcriber has spoken with almost every County Chair in the last two months and not one of them supports Anderson other than Rob Craig, Utah County Chair. She notes that Anderson has divided the party so deeply that people are leaving. Many Leg. Chairs struggled to pull off caucus night because of Precinct Chairs that had quit. The effects of Anderson’s support for SB54 were shown in the frustration of many Republican voters who didn’t attend their caucus wondering: why should I when the law bypasses the convention process?

The Sanpete County Chai, Kim Pickett is gathering signatures to run for County Commissioner as a Democrat just to prove how bad SB54 is.

“Much to the chagrin of Republican Party loyalists, Utah’s unique caucus system may soon be a memory of a bygone era. An exclusive, sexist (like most American institutions) and power-hungry era. But if the Count My Vote petition initiative passes this November, which would tweak the number of signatures required down to a much more constitutionally-appropriate level, then Utah’s caucus system could be gone for good. Good riddance.”

One reader stated “Someone should remind the Tribune it was them that insisted Utah go back to a Caucus/convention system after the Primary system failed when it was tried in 1937-47. The Tribune editorial is pathetic Yellow Journalism. I have come to NOT value the Tribune’s editorial opinion as any useful indicator of anything besides a gauge of what our nasty & mean-spirited Leftist opposition thinks. To that extent it’s useful: an inside glance into the belly of the beast, to guide our own efforts to reach a very different crowd. In most parts of the state, Tribune has a VERY LOW readership. Nobody with an accurate Moral Compass will read and accept their dross. Anyone who has their hat on straight will recognize this Trib article for what it is.

Is Utah County NOT participating in Vote By Mail in November?

Who here is not surprised that Utah County will not be doing VBM (Vote by Mail) this election? Cities are being informed by the UtahCo Elections Office that they are going back to the old machines. I wonder if certain people are worried about a higher voter turnout that could hurt certain campaigns or initiatives? You may remember that In Utah County, 68,000 ballots had to be destroyed last year because the ballots were “mistakenly” mailed out. More than 68,000 mistakenly sent GOP ballots in Utah Count

Anderson Continues to Ignore the SCC

The tin-pot dictatorship of Chair Anderson toward the SCC continues unabated and shows his blatant lack of balance and respect for his position and the SCC.  For example, at a recent meeting, the chair failed to recognize a legal motion presented by the body and actually turned a blind eye to it and others. In the next meeting, the SCC voted to remove the attorney from the chair. The attorney was not approved by the body of the SCC, therefore the chair violated the ethics of the party and misused party funds

Because the body has not acted to censer the Chair, is there a lack of faith the SCC will do anything? Anderson is not afraid of the SCC. Just so everyone is aware the State Party has not yet given the State Constitution and Bylaws Committee any of the Amendments submitted to the State Convention. “Any Party Officer who has publicly expressed their personal support or opposition to any platform amendment, resolution, or amendment to the Constitution or Bylaws may not chair the portion of the State Central Committee meeting or State Convention in which that measure is contested.”

Related article: Report: ROB ANDERSON: The Face Behind the Mask

In an article “10 questions with Rob Anderson” posted yesterday by Kurt Manwaring, Anderson was asked “In the spirit of Alan Alda’s “flame challenge,” could you describe what it means to be a member of your party in a way a child could understand?

In true Hillary Clinton progressive liberal socialist fashion, Anderson’s stated “Government is like your family. The head of the government (your parents) make the rules. Sometimes you like the rules, sometimes you don’t. Sometimes you lobby (plead, cry, beg, temper tantrum) to change the rules. When that doesn’t work, sometimes you try to negotiate through words and behavior. You learn that working together – rather than constant opposition – works best.”

Actually, Anderson has inspired me to come out of the closet. By his example, I must stand up against the hostile enemies that surround us as they continue their desperate attempts to tear down the very institutions that their selfish lives depend upon. Only the hateful and mentally insane could oppose such a socially progressive, bright Utopian future. I myself, at times, have also been guilty of thinking but I have repented and now avoid that temptation. I have learned that considering facts, science, economic history, political history or simple math will only lead me astray. After all, true revolution and progress require action and if I’m thinking, then I’m not acting. Instead, I’m actually impeding progress and aiding the enemies that willfully commit acts of treason against our Motherland. Now, all I wish to do is bask in the glory of our ever-knowing and an ever-expanding government whose only purpose in being is to protect and watch over me. Nobody can better plan,

monitor, supervise, and assess my quality of life than a well-meaning government official, sensitive to my needs and fantasies. Nobody has ever loved me more. I feel so special. Don’t you?

This is a great time for all of us to share and make a list of how we feel about our government and our dear leaders. Remember, all we have is granted by them and they always have our welfare and interests in mind…. a list of thanks is the least we can do. I can’t imagine what my life would be without them in my life… Really!!! I, for one, am grateful that I no longer have to worry what reality is. What could possibly go wrong with Rob Anderson as my social and moral compass?