Tales from the Crypt – In Search for the Bottom 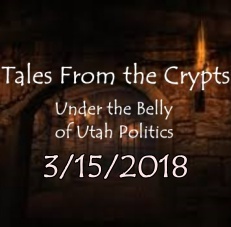 By Charles Magne & the Utah Yaks

Mitt – Is He Floppin’ Around Again?

Mitt Romney stated his intentions to flip both ways and go the caucus AND signature route, but as of 8am this morning, he had yet to file as a caucus candidate. Could it be possible that Romney is taking his campaign and the voters of Utah for granted and assuming that he doesn’t need to do the minimum candidates typically do to win? The filing deadline is today at 5pm. Even a write-in vote has to declare by then. Beware the Ides of March!!!

It will be interesting to see what happens if Mitt doesn’t declare his candidacy. Maybe he doesn’t know about the deadline and he’ll go back to where he came from! Let’s not tell him

Romney is working hard right now to get delegates who will support him out to caucus and elected. But, ex-Senator Bennett tried the same strategy and it didn’t go so well for him. Romney is sending out emails daily, marked urgent, that ask people to run as a state delegate and support him. Many of them ask you to sign something and send them back if you’ll run as a delegate and vote for Romney at convention. Some people are probably falling for it, and it could change the dynamics of the types of delegates we get.

This unethical tactic should cause concern because it is exactly the type of corruption that has been rampant in our caucus-convention system. Is seems to me that we can do better and drain the swamp instead of bathing in it.

Delegates should meet and vet all candidates. That is how we get good candidates. Caucus attendees usually pick well-informed, smart delegates who can think for themselves, not sheep in someone’s predetermined barnyard. 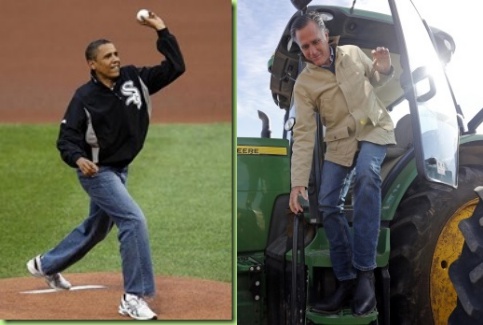 Speaking of barnyards, remember those photos of Mitt driving the tractor and looking at the cow while dressed in his designer jacket, cowboy boots and spotless jeans? Here’s how that photo-op went down: Mitt’s limo driver pulled up to the farm. Mitt got out and walked over to the tractor, climbed up and posed with his hands on the steering wheel, climbed down, looked at big tractor tire and then actually touched the tire (don’t worry, it wasn’t dirty). He climbed down from the tractor the same way that Obama threw a baseball. Then he walked over to the corral and got his pic taken looking at a good-lookin’ daisy cow. Then, he walked back to his limo, got in, and the driver took off. Mitt didn’t want to know anything about the farm. He hair was perfectly coiffed.

One involved voter recently attended a “meet Mitt” event. When he walked in they were collecting signatures and saying things like “sign and you can meet Mitt” He refused and they were stunned.

This guy just doesn’t know when to stop. Since he was elected last year as UTGOP Chair, Anderson has done everything he can to cause division within the SCC and has never, not even once, offered an olive branch to the majority of members that he’s alienated. Instead, in true dictatorial fashion, he continues to find ways to make himself less popular than he already is. There seems to be no bottom to his endless disregard for party bylaws and his efforts to destroy the Republican party and the caucus-convention system.

The word on the street is that Anderson has told County parties that the SCC Bylaw change has been ruled null & void and should be disregarded. To say that is a lie would be insulting to the word ‘lie’. Anderson has disregarded the will of the party’s ruling entity since he assumed his position by misrepresenting and presenting himself as the opposite of what he is. It didn’t take long for people to realize that they had appointed a “stooge” of the ruling establishment and “Count My Vote” instead of the preserver of the caucus system that he pretended to be.

In his “ruling”, he cites no precedent, finding or ruling, bylaw infraction or party Constitution violation, and not one legal fact. He just arbitrarily declares. Welcome to Rob’s world. That’s how he does everything.

Since Anderson has declared the State Central Committee “null and void,” the SCC should return the favor. The SCC holds the authority and power here, not Anderson, who refuses to do the will of his own party.

Anderson has turned the party into a “loose cannon” and is probably responsible for the mass exit of legislators who are scared of what the party has become and Anderson’s destructive tactics. Dictators depend upon people losing faith and pulling away. They do not do well with engaged people. Anderson refers to the SCC majority as a “small minority” and “rouge” members. However, not once has he been able to marshal his so-called massive majority to counteract what the real will of the party is. It’s time for him to go and be replaced by someone who can communicate, show respect to others, and honors the position of representing the best political party and people that Utah has to offer. He has disgraced himself and the party.

Mike Kennedy has filed for U.S. Senate against Romney and conservative @Larry Meyers.  Kennedy’s filing was somewhat of a shock and likely a stealth move on Meyers. On the closing night of the Session last week, when everyone announced all their retirements, Kennedy was NOT among the ones who publicly announced his departure, even though the back-office planning was clearly already in the works for his Senate run. There are 16-18 sitting House members who haven’t yet filed to run again!! That may be telling about how the morale is in that place after the sickly showing of true Constitutional Conservatism this past session. As long as Romney doesn’t get a majority during the first round at convention, Meyers and Kennedy both have a chance. Neither are doing signatures.

“This is the End”

A recent City Weekly article titled “This is the End” sadly chronicles the last days of the 2018 Legislative Session. The following are direct quotes from their story:

“Deidre Henderson, R-Spanish Fork, for example, who had glued her eyes to her phone, rarely looking up even when voicing her vote. Or Sen. Luz Escamilla, D-Salt Lake City, who wandered away from her desk at a leisurely amble. Lawmakers whispered to their guests and staff, gulped soda pop, talked softly on their phones, fiddled with trinkets on their desks. No one seemed to be listening other than for their names during the roll-call votes.

This was how the 2018 Legislative Session in the Senate whimpered to sine die. Fiery, passionate speeches were replaced with looks of “wait a sec, what bill are we on, now?”

With five minutes left in the session, Sen. Vickers sped through a reading of one of the last bills that sounded like it had something to do with county roads. No one listening for the first time would know what it addressed, however, by listening to his spewed enunciation where each word blended into the next. The body passed it along just as quickly. It was perhaps the lone moment of urgency on the Senate floor that glacial day.

The Senate had a list of bills it had on the docket, but because not all members read at Vickers’ speed, a host of them didn’t make the midnight cutoff. Looking back, Gov. Gary Herbert grades this session “an A or an A-plus.” The governor shared his thoughts in the Senate chamber 30 minutes after the last bill was passed, and boy was he pleased.”

You can read the entire article here. They also have a great article titled “The Foilies 2018 – Recognizing the year’s worst in government transparency.” by the  The Electronic Frontier Foundation. I think they missed a few and are a bit biased, but this is well worth a read.