Tales From the Crypts: Fake Dirt 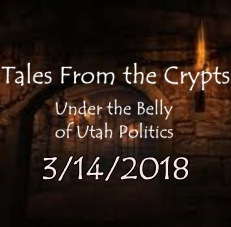 Oh, this is gonna get messy. As if  UTGOP Chairman Rob Anderson didn’t already have enough problems with normal Republicans, outside of leadership, learning about the full extent of his duplicitous behavior regarding his ongoing attempts to destroy the caucus-convention system, and the party, rumors have started to circulate about him being asked to resign, again. Anderson  may have to turn his attention away from attacking members of the SCC and direct it toward defending his own actions. With all of the termoil he’s caused, Anderson would be doing the party a favor by stepping down from his leadership position. But, with an ego as big as his, I doubt that anything will faze him into doing the right thing. After all, if Anderson is anything, he is always right and above it all. We’ll see.

Dave Bateman, caucus crusader and bailer outer of the UTGOP, reported that “A female employee who works for me recently came and reported that a person who identified himself as a “political attorney” approached her on multiple occasions and offered her “no less than a million dollars” if she would cooperate with him in making false sexual harassment allegations against me. Shockingly, this isn’t the first surreptitious assault on my character in just three short months.”

Big-money politicians hate the caucus system because they’re held accountable, and can’t buy their way into office. The media hates it because they don’t make as much money off of political campaigns, so they are mischaracterizing the supporters of the Caucus-Convention system as “right-wing nuts. The richest politicians in the State are raising millions to destroy the Caucus System under the misnomer “Count My Vote”. Bateman stated “We can’t let it slip away [the caucus]so 100 rich guys can seize control of Utah politics through the Count-My-Vote power grab.” I couldn’t have said it better myself.

Seegmiller Says NO to Rubber Stamps

Utah House Representative Travis Seegmiller, District 62, who replaced disgraced Jon Stanard, was  just rated by the statisticians among the “Top 4” House Members who voted “NO” the most to bills voted on the House floor. Seegmiller is a conservative Professor of the Constitution at DSU and pushed for the SB54 repeal that passed overwhelmingly in the House.

Hopefully, he’ll be able to teach his fellow legislators a little about the proper role of government. The only thing worse than an “Activist Judge” is an “Activist Legislator” with their overreaching unconstitutional power grabs. Good for you, Travis. You’ve got my vote.

Why does Utah County donate $113,000 tax dollars to the Freedom Festival? Do they donate county tax dollars to other county summer celebrations? A Daily Herald article states: “The proposed contract has the county providing $113,000 in funding for the annual festival, a multi-day patriotic-themed festival held in Provo and centered around the Fourth of July.” But, the commission is delaying approval after a LGBT group was excluded from the festivities.

Utah Policy is having a fun little poll that is matching up “Political Power” figures in a battle to move onto the next round…. of something. Debate is raging about how this poll compares to their serious polls, that are usually wrong.

Today’s contest is between the much heralded Governor Herbert and the dastardly Dave Bateman. At the time of this writing, guess who’s winning? Herbert is getting whooped, 16-1. Finally, a poll that can’t be bought. Yesterday, Buckshot caucus defeated Sutherland Institute. (A poll that can be bought?) Tomorrow’s poll matches up Dave Hansen vs. Greg Bell. I’ll be on the edge of my seat. I would provide a link to UP’s site, but that’s against my creed.