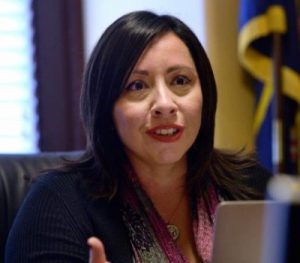 During a House committee hearing on SJR2, a resolution that “encourages Salt Lake City to procure services from Utah firms that will substantially employ Utah workers for the Salt Lake City International Airport Terminal Redevelopment Program,” Representative Angela Romero (D- Salt Lake City) attempted to stifle any discussion on the prevalence of illegal alien workers in the construction industry and the need to protect jobs for American citizens and legal residents.

Romero objected to the introduction of information from a Pew Center study that found that illegal aliens account for one in seven or 14% of construction workers in Utah.

She also had concerns with a suggestion that the resolution be amended to encourage all employers to use E-Verify in spite of the fact that E-Verify prevents illegal aliens from using the stolen Social Security numbers of Utah children for employment purposes and prevents illegal aliens from earning money that is subsequently transferred from the state of Utah to their home countries.

So rather than fighting to ensure that jobs go to legal workers and to protect Utah kids from illegal alien driven identity theft, Romero appears to see her role in the legislature as representing and protecting the interests of illegal aliens.  In that capacity, she fights to stifle the presentation of facts about the large presence of illegal aliens in the Utah workforce, works to preserve job opportunities for illegal aliens and opposes efforts to prevent illegal aliens from using the stolen Social Security numbers of innocent Utah children.

Although illegal aliens may not be able to vote, they are still represented at the Utah State legislature.

Click here to listen to the discussion beginning at 55.35.

One in seven construction workers in Utah is an illegal alien.  (Pew Center/Salt Lake Tribune)

Utah children are prime targets of illegal alien identity theft with an estimated 80,000 children having their Social Security numbers being used by illegal aliens for employment purposes.  (Infants and Youth Hit Harder by ID Theft than Senior Citizens—Illegal Alien Connection)

Some children have their identities stolen by illegal aliens even before they are born and have their futures severely compromised.  (Today [Show] Investigates:  ID theft and your child: Stealing from a baby).

Illegal aliens transfer a substantial portion of their earnings out of Utah and out of the United States.  (Remittances to Mexico spike after November election)