Into the Fray: Massive Turnout for Republican Convention. Primary Battle Ahead

By Ed Wallace – 04/16/2016  – Updated  4/17/2016 10:31PMThe Washington County Republicans held their nominating convention today at the Washington County Fairgrounds with a record number of delegates attending. The room was packed with the 499 delegates plus the candidates and party officials. Robert Jensen, WC Republican Party Chairman, was ecstatic that 95% of the delegates showed up and mentioned three times that Washington County is the reddest county in the state and that Utah is the reddest State in the country.The candidate field included establishment candidates Gil Almquist (running for County Commissioner) and Don Ipson (State Senate 29). Dean Cox and Jimi Kestin also ran for the County Commission while Walt Brooks, Slade Hughes and Steve Kemp ran for House District 75. Incumbent Don Ipson (House District 75) was challenged by outsider Richard Jenkins who were both running to fill the Senate seat vacated by retiring Steve Urquhart.Jenkins, a 28 year old Veyo resident, surprised many who saw him as the most inspiring example of all the candidates. Don Graves described Jenkins as “an unknown 28 year old young man from Veyo, … (who) took the stage with no elected officials surrounding or supporting him. Armed only with a very impressive statement of his core Constitutional values, he came within one vote of forcing a sitting, four term State Representative into a primary for State Senate 29.” The first ballot vote was Ipson – 203, and Jenkins – 135.Jenkins wasn’t the only newcomer to run for office. Kate Dalley, host of the ‘Kate Dalley Show on Fox radio KZNU 1450, stated “ We had an opportunity at the Republican County Convention to vote in 3 individuals who would have brought something new- an actual limited Government. 3 people who were not career politicians who want to climb the ladder, but just regular folks looking to serve who understand the constitution. There was one guy for each of the three races today at the convention- that weren’t establishment. None of them made it past today.” Dalley was referring to Jenkins, Slade Hughes and Jimi Kestin… all lost on the first ballot.The first round voting results were:
County Commissioner:
Gil Almquist 184
Dean Jeffery Cox 187
Jimi Kestin 124
Utah Senate District 29:
Don L. Ipson 203
Richard Jenkins 135
House District 75:
Walt Brooks 45
Slade Hughes 24
Steve Kemp 60

The second ballot for County Commissioner concluded with a tie vote between Dean Cox and Gil Almquist with 224 each. And for House District 75, neither Walt Brooks or Steve Kemp received the required 60% majority vote to win (Brooks-55 to Kemp-69). These two races will be decided by a primary vote.

Chairman Robert Jensen stated that “Everyone who wants to be involved can be involved.” and that the caucus and convention were “representative of our local neighborhoods and people who cared.” In a reference to the Count My Vote initiative, Jensen said “ ‘Count My Vote’ is about money winning elections. Money does not win votes in this room.” 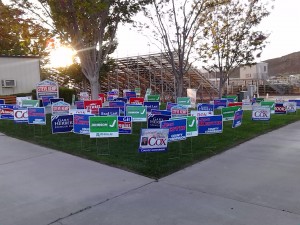 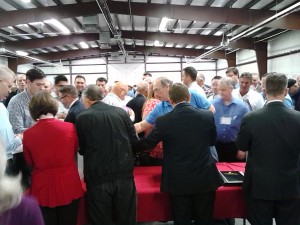 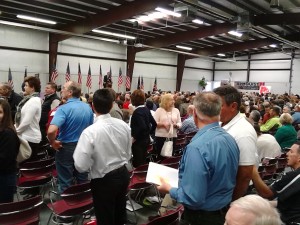