Will Municipal Candidates Take a Stand for Constitutional Government? 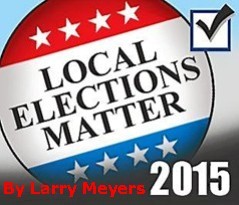 First, will the candidate defend Constitutional rights by opposing unconstitutional federal mandates and regulations? Our Constitutional rights are under attack by our own federal government. The IRS successfully muzzled the Tea Party from speaking out in 2012.  Pro-life religious organizations are being forced to pay for abortions in their health insurance programs.  New gun control measures designed to limit our Second Amendment rights were narrowly defeated in the US Senate in recent years. The NSA was caught spying on us without probable cause or warrants. And, new scandals continue to be exposed daily. We need city councils and mayors who will stand up against federal overreach, who will say to the regulation-quoting bureaucrats and the armed and armored federal agents:  “Not in my city!”

Second, is the candidate willing to cut spending, reduce taxes and fees, and privatize services wherever possible in the city budget and services? This may be the toughest question of all, as cities always need more money to spend: more money for police, for fire trucks, for roads and bridges, for employee benefits, and on and on. The key here is finding candidates who can distinguish between essential city services and waste, and who will vote to eliminate the latter. And, regarding fees, why should local businesses have to pay a fee every year in order to get a city business license? How about creating a system that allows businesses in good standing to renew their business license online without a fee? Let’s find ways to leave the money in the private sector, rather than transferring it to the public sector.

Third, will the candidate accept unconstitutional federal funding of municipal projects, or does he or she have the courage to say “No!”? The US Constitution limits the authority of the federal government to a few national needs, but that has not stopped the Feds from taking control of local matters by offering funding, with strings attached, of course. With the federal government trillions of dollars in debt, isn’t it time our state and local governments tightened their belts a little more and stopped taking federal funds?

Finally, is the candidate committed to holding local businesses that hire illegal workers accountable? Regulating immigration into our nation is one area where the federal government has Constitutional authority and has exercised that authority to prohibit illegal aliens from working in the US. Local businesses are required to obey these federal labor laws, and most do. But those who knowingly hire illegal workers gain an unfair advantage over the businesses that obey the law. The issue is one of fairness and having a level playing field. We need local officials who will put teeth into our business licensing by investigating, fining, and even shutting down businesses that refuse to play by the rules.

These criteria for judging candidates are not special interest issues designed to benefit only certain groups in our community. Instead, they are principles that are for the benefit of everyone:  Constitutional rights for every citizen, lower taxes for all, less regulations on all of us, and a level playing field for all businesses.  Surely there are candidates in our cities who are willing to take a stand on these principles. Let’s find them and elect them to stand for Constitutional government and individual liberty at the city level.