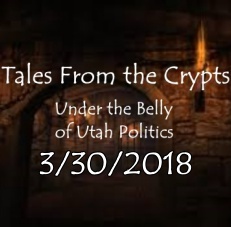 Numerous reports have come in about a visit that UTGOP Chair Rob Anderson and Lt. Governor Cox made to the House chambers after being “invited” for a little confidential, closed-door, meeting during the last session. The House Majority Caucus basically wanted to know “what in the heck is going on here?” in the midst of the aftermath of the UTGOP SCC Bylaw changes.

Witnesses have reportedly that Anderson lied and produced bylaws that did not reflect the will of the SCC and told them many other things that were misleading or untrue. The Legislators asked Anderson if his own resignation would solve a lot of the problems within the UTGOP. My sources tell me that Anderson’s face became “blood-red”, he dug in his heels and went in full Tin-pot Despot mode, and vehemently said that he will NEVER resign or step down in the face of this kind of problem, that he is the right man to handle this dilemma, and that to the contrary, he will likely run again and remain Chair for years to come. With his swift and decisive “NO”, in front of most sitting (R) House members, that put a damper on the rumors, hopes and maybe even prayers of some people that Anderson would go willingly.

They then brought Spencer Cox in to speak about the same issue and to get his perspectives as the Enforcer in Chief of the election laws. Cox advised them all to choose the dual path, caucus, and signatures, to give each incumbent the highest level of assurance that they’d actually end up on the primary ballot with an (R) next to their name. This was, of course, before the Denver decision on SB 54 came down.

So, those incumbents who openly defied that counsel from the State’s top election law guru, solely due to their love and even reverence for our Caucus System……well, THOSE INCUMBENTS have some guts and deserve at least a little of our respect for their decision. They each deserve a thank-you letter, our support, and our vote, to go against the trend in the legislature by checking ONLY the “Caucus path” candidacy declaration box. They are in the minority but most, with a few exceptions, will get my support., unless they voted for SB54 and/or ArticleV and are not members of Buckspitters.

Senator Margaret Dayton, R-Orem, has announced her retirement in June from the Utah Senate due to medical reasons. She has served 22 years and is the longest-serving woman in Utah legislative history. Know as “Utah’s Iron Lady” Senator Dayton is one of the last true conservatives in the legislature, perhaps the only one depending on your definition of “conservative” Dayton is the ONLY sitting Utah Senator who voted against ArticleV and Count My Vote (SB54). There is speculation that she didn’t want to be stifled by a liberal Senate any longer and purposely waited to announce until after the filing dates.

Dayton had filed as a caucus-convention candidate. Her Republican challengers, Emily Ellsworth and Keith Grover, both filed as signature and caucus candidates. The other challengers, Lee Houghton, Unaffiliated, and Tommy Williams, Independent American, both filed for the caucus route.

Scam Alert: First Freedom Television is manipulating leaders of gun rights organizations into teaching gun safety with guns partially hidden in stuffed animals. Their claim is that Israeli Prime Minister Benjamin Netanyahu is encouraging toddlers to be trained to kill terrorists. They have manufactured phony news stories to deceive gun rights leaders and hoodwink them to take part in their flim-flam scam to humiliate them and make gun owners look careless and stupid. I admit under duress I was sucked into this scam. I’ve had requests to attempt to duplicate their ploy. Introducing: Puppy Pistol, Bunny Gun, Uzicorn, BFF Gun, and Dino Gun. I’m hoping to ruin their surprise and warn all gun owners to be wary of any media company that will try to dupe them into doing things against their beliefs. This gun safety program is extremely dangerous. This teaches children that guns are as harmless as stuffed animals. Guns are dangerous and should not be confused with toys. Since we first exposed FFTV, they have removed their website and Facebook site and may be operating under a different name. Please warn gun owners to be aware of this scam. It’s extremely irresponsible and could have deadly consequences. Note to everyone–This picture is for purposes of exposing a scam and should not be replicated in your homes. Thank you for your time.

I don’t know where to begin with on this one. This bill, sponsored by Rebecca P. Edwards along with Senate Sponsor Lincoln Fillmore, clears the way for the Legislature to “poll” the voters about the big 33% gas tax increase. Polls are often skewed to get the results that poll wants. The only poll these two should be worried about is the election poll.

There was bitter opposition to this bill on the House floor to at least change the wording so that it would be clear, rational and fair to the taxpayers how vicious the gas tax increase really is. HB491 is one of the package bills in the package of ludicrous bills that affected the tax increases, passed in a huge surplus year, that the leadership agreed to pass into law if the “Our Schools Now” leaders would pull their ballot initiative to rest. This same tactic (plan?) was used by proponents of SB 43 (Count My Vote) back in 2014.

Proponents argued that the legislature needed to be able to gauge public opinion better and didn’t have the tools for that, short of hiring expensive private sector firms, so why not just put the legislature’s own little public opinion question right on the ballot? It was pitched as a better result than a ballot initiative with stronger teeth and as the way to avoid nastier ballot initiatives, by just letting the legislature do it’s own little public opinion poll among actual voters. Those in favor are pushing pure democracy, oligarchy tactics to force the government into complying, by using uneducated voters to show “the will of the people.”

Many Legislators refused to put the gas tax increase on the ballot. It’s completely asinine that a majority of our legislators have let them get away with it. They have become emboldened and money and threats talk. Shame on them. And, shame on our Governor for signing it into law.

Herbert coming out against Marijuana

Todd Weiler – As Dirty as it Gets