– Speakers from the Salt Lake Area Restaurant Association, a recruiting firm, the Salt Lake Brewing Company and Senator Jim Dabakis repeatedly trashed Utah and Mormons as they called for a veto of HB155 which lowers the legal blood alcohol level for driving from .08 to .05

– Speakers gave other states competing with Utah for economic development and tourism a treasure chest full of sound bites to use against Utah.

– Whether Governor Herbert vetoes HB155 or not depends on who has his ear—the Salt Lake Chamber or the LDS Church.

Opponents of HB155 which lowers the state’s legal blood alcohol limit from .08 to .05, the lowest in the nation, called on Governor Gary Herbert to veto the bill during a combination rally and press conference on March 17.  According to Representative Norm Thurston who sponsored the bill, HB155 is designed to let people know that it is not o.k. to get behind the wheel after drinking—period. 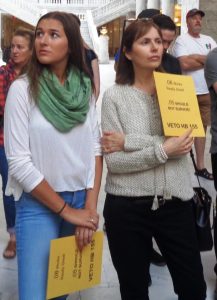 Although the stated purpose of the rally was to call on the governor to veto HB155, many of the comments came across, either inadvertently or deliberately, as trashing Utah and Utahns who are members of the Church of Jesus Christ of Latter Days Saints (LDS), also known as the Mormon Church.

Those speaking used the following terms and phrases when putting forth their case for a veto—”most extreme law of its kind, HB155 is a message bill; Utah is not tolerant; Utah is not friendly ; Utah is not welcoming; Utah is not respectful; , it is bad for Utah’s reputation , punitive and disagreeable policy;  no backing in science or logic for the policy; repressive and unwelcoming; Utah culture is too repressive, Utah is a laughing stock and a laughing Stockholm syndrome , Mormons are not friendly to the rest of us; The world is not welcome here; it stigmatizes Utah; What the hell is wrong with Utah; It makes us the laughing stock of America; the state’s “quirky” liquor laws.””

Michele Corigliano, the Director of the Salt Lake Area Restaurant Association started the event by saying that HB155, “is the most extreme law of its kind in the country.”  Then she went on to call it a “message bill” that tells people that “Utah is not tolerant of people who enjoy a glass of wine with dinner. Utah is not friendly to skiers who want to have a cocktail after they hit slopes. Utah is not welcoming to conventions whose attendees want to have a beer after their meetings and Utah is not respectful of the businesses that are relocating here from out-of-state.”  It seems that her comments, whether intentional or not, will make great sound bites for Utah’s competitors to use against the state and its people – extreme, unwelcoming, intolerant, unfriendly and disrespectful.  Ouch!

Kirsten Park, a Salt Lake City resident, read a letter that she had sent to the Restaurant Association.  In it she wrote that the message sent by HB155 is that “The world is not welcome here….I can’t continue to explain to visiting guests our punitive and disagreeable policy with no backing in science or logic.”  Park’s letter makes it appear like Utah is way out in front of the rest of the world on the .05 limit; however, over 100 countries, many of them who send large numbers of tourists to Utah, already have a .05 blood alcohol level.  In spite of this, no one accuses France, Italy, Germany, Switzerland, or even Thailand of sending the message that the world is not welcome in their countries nor do their citizens spend a lot of time explaining their “punitive and disagreeable policy” to visiting guests.

Ema Ostarcevic, founder of Search Group Partners argued that HB155 is bad for business, is bad for jobs and is bad for Utah families:  She told the media that “I believe that it will significantly hurt our ability to attract talent and grow jobs in our state.” According to Ostarcevic, the number one objection she hears from people that she is trying to recruit for jobs in Utah is “that our culture, specifically our liquor laws, are too repressive and unwelcoming.”  Potential clients may wonder just how effective Search Group Partners will be in recruiting people to Utah when their founder seems to be saying that Utah’s culture has to change before they can get people to take jobs in Utah.  Will this change require selling beer, wine and liquor in grocery stores and establishing neighborhood bars throughout the state? 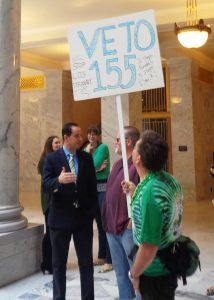 Doug Hofeling, Chief Operating Officer for the Salt Lake Brewing Company emphasized the harm the bill would do by turning Utah into a laughingstock, in other words Utah would be regarded as very foolish or ridiculous.  He said, “We feel very strongly that this bill does not support the public good and will do irreparable harm to Utah’s reputation and economy….We say this because we know this…. It seems sometimes as though we have become so accustomed to being a laughingstock that we have to act to actively ensure we remain one….It’s like support for laughing Stockholm syndrome….Can we please finally break the syndrome?”

Hofeling concluded his remarks by stating that:  “We [the hospitality industry] are the grand ambassadors of this state and we are telling you that this bill will damage our state’s reputation for little or no good.” Hofeling’s assertion that Utahns are a laughing stock (very ridiculous and foolish) is an interesting way for an “ambassador” to talk and it would lead some to say that the hospitality industry is actually working against the people of Utah by making fun of them and denigrating their beliefs and values.

Utah State Senator Jim Dabakis (D-Salt Lake City) was the final speaker and he put forth a series of arguments to help convince the governor to veto the bill:  (1) Having Utah on the cutting edge of liquor laws doesn’t make sense since most Utahns don’t drink so what do they know about it?  (2) Rather than lowering the blood alcohol level, Utah should come up with a policy that deals with drivers who are really drunk.  (3) Utah should wait for two or three other states to impose the .05 limit to see if there is evidence that it works.  If there is evidence, Dabakis promises to sponsor a bill imposing the .05 limit.

Dabakis joined the other speakers in trashing Utah by arguing that a .05 blood alcohol level stigmatizes Utah.  He noted that social media has exploded with comments such as “Come to Utah on vacation, go home on probation” and he asked, “What the hell is wrong with Utah…It makes us the laughing stock of America and will cost the state jobs.”

Dabakis asserted that Utah’s future is tourism because we’re “not going to be feeding people coal.”  So, when taken together with the previous speakers’ comments, it appears that Utah has to replace its traditional culture and values with an imported culture in order for tourism to flourish.  Therefore, the emphasis on tourism provides those who oppose traditional Utah values the justification they need to further dilute those values and to depict Utahns who continue to hold on to them as unfriendly, intolerant and foolish.  After all, if Utah maintains its traditional values, it will stifle the state’s future which is tourism.

Tali Bruce, franchise owner of the Bout Time Pub & Grub sports bar, also attended the rally and held a sign that read “.05 is the tyranny of the majority.”  During a KUTV television interview she made it clear that Utah’s traditional culture is hostile to her and others who drink when she said:  “I don’t think this change from .08 to .05 is based on any kind of science.  The majority of the population here would like to say we’re the toughest on alcohol. I believe it’s in the culture, it’s in the religion, it’s in the predominant religion, and that’s not friendly to the rest of us.”

References were made throughout the event to full-page ads placed in Salt Lake City’s two daily newspapers by the Washington D.C. based, American Beverage Institute (ABI).  Those ads mocked the state’s “quirky” liquor laws and suggested that lowering the legal blood alcohol limit would benefit Colorado.  Arrogant, high-paid Washington D.C. lobbyists apparently think that making fun of Utah will get the governor to Veto HB155 but it could just as well backfire on them.  After all, the surest way to turn Utahns against a candidate or an issue is to have an outside group get involved—just ask Dan Liljenquist who ran against Senator Orrin Hatch and lost big in the Republican primary election when outside groups intervened heavily on his behalf.

Signs carried by people at the rally also trashed Utah and Mormons:  Veto HB155: Stop LDS Tyranny;  HB155 criminalizes people for having a drink; Most Divisive Bill Ever; Don’t Give Visitors Another Reason to Laugh at Utah.  Other signs showed support for the current .08 blood alcohol content—.08 works, really great—.05 should not survive, Veto HB155.

Actually, frequent references were made to just how great .08 is which is interesting since Utah was the first state in the nation to adopt the .08 level in 1983.  Would the people who like it so much now have supported it then or would they have put forth the same arguments against it as they are now putting forward against .05?

Ed Staley, a veteran and former dentist who was disabled by a drunk driver, stood in support of the .05 limit.  He explained how a drunk driver ruined his life and rendered 13 years of education required to become a dentist useless. Staley said he doesn’t oppose people having a drink but they have to do so responsibly and to plan ahead so they will know how they are getting home without killing or injuring someone else.

The rally could have had an impact since whenever someone uses the term “economic development” that always gets the Governor’s attention.  However, given the Mormon bashing of the opponents and the Mormon Church owned Deseret News’ editorial on March 19 calling for the Governor to sign HB155, the smart money is now on the bill being signed.

Click here to view the entire event which was organized by the Salt Lake Area Restaurant Association.