By Ed Wallace – Jun 29, 2016 – 1:30 AMUtah voters have spoken. Any questions about the popularity of establishment politicians have been answered. With few exceptions, we will see the continuation of the status quo as familiar incumbents remain firmly entrenched in their positions of power.On the Republican side, Jonathan Johnson got whooped… bad. So did BYU professor Chia-Chi Teng who ran against Jason Chaffetz. Morgan Philpot lost his race to Dan Hemmert and Chris Herrod lost to incumbent Curt Bramble.

On the Democrat side, Jonathon Swinton, a marriage therapist, lost to Misty Snow, an openly transgender woman. Snow will face off against Republican Senator Mike Lee in November’s election. Things sure have changed. Stock up on the popcorn for this one.

On the common sense and bright side, the State School Board race saw some staunch anti-common core candidates move on. They are Michelle Boulter, Dr. Gary Thompson, Alisa Ellis and Lisa Cummins, all extremely dedicated and versed in education issues, and all endorsed by Utah Standard News.

Most of the comments on social media have been about Johnson and Herbert. Here are just a few of them:

Ken Ivory: Very proud of my friend, Jonathan Johnson, for changing the narrative in Utah on local control in education, fighting NOT inviting federal overreach, and refusing to tolerate statehood inequality with respect to federal control over our lands, lives and livelihoods.

Anne Bruns: If ever the phrase “nice guys finish last” was true it was tonight. I am honored to know Jonathan Johnson and incredibly proud of the campaign he ran. I have never been interested in politics until this race because finally we had someone run that made actual sense. I am disgusted with the things I’ve learned about Herbert and his policies and I hope that this is a movement that will grow bigger and stronger. I’ve learned more about issues than I ever thought I would and I hope to do my part to improve locally what I can. Healthcare and education. We need changes and we need them now.

Kate Dalley: Incredibly sad tonight that the people of Utah chose Herbert to stay in for Governor, who openly admitted on tape he would do anything the lobbyists wanted for the right price. He called himself “Available Jones”- how disgusting is that. I am sickened over it. We get what we deserve and sadly, the next Governor’s term will give me plenty of radio fodder because his voting record will stay as deplorable as it’s been throughout his last term. I suppose now he will jump back to his original stance from 2 months ago to tell us how great Common Core is, now that his campaign is not in jeopardy.

Mary Burkett: JJ campaign headquarters. You know this candidate is a fiscal conservative. The surroundings are Spartan at best. Party refreshments are light. Nothing fancy. But the mood is upbeat. The connection between campaign workers and supporters is special. Tight. Grateful to be a part of it.

Overcoming the wanton laziness and wanton stupidity of the Utah voter, is nothing short of a herculean task. Utah voters are known to be clueless and disengaged, and to see their political leaders the exact way they see church leaders. ALL HE (Herbert) HAD TO DO, was put up billboards and TV ads essentially saying “all is well in Zion” in order to win.

My neighbor seemed surprised that I wanted Herbert out and asked why. She admitted that she didn’t even know who was on the ballot or anything about them

You think Herbert was bad before, watch how corrupt he becomes now that he knows he can get away with it and still win. Disappointing to say the least.

Face it! A majority of voters, and they voted today, vote based off of familiarity of name. I bet only 5% of them know what HERBERT has or has not done and those are already Utah politicians in his pocket. Disgusting that people really do not research the candidate.

I am physically sick about this. I cannot believe people don’t care about Gov. Herbert’s lack of morals, his total embrace of common core, and his “Available Jones” attitude.

It’s too bad too many Utahans will just blindly vote for who they have heard of or whoever the incumbent is.

The guy literally ran and hid like a little girl so he didn’t have to debate his record, and his lemmings all reelected him.

We need to help get the knowledge in people’s heads!!!!! I’m by all means not a politician or whatever, but dang it, I’m about to get real political in the next few months.

These are the same voters who have sent Orrin Hatch back to the senate every 6 years since 1977 — he’s coming up on 30 years!!

I am tired of the “All is Well in Zion” mentality. We can do better!

Are Utahans really THIS stupid? Harsh, I know, but sooooo frustrating.

Utah has missed an opportunity to have a Governor we could be proud of.

Herbert sold Utah down the Federal River for $$ a long time ago.

Its time to let the republican party die. It largely represents ignorance at this point.

I wish Utahans could have informed themselves better.

So we are stuck with Herbert ? Really? Are you friggin kidding? What the heck is wrong with Utah?

Utah is no longer conservative! How blind can people be to reelect this fraud AGAIN!

Today I am sad to be a Utahan

I had hope and it was shattered, continue on down the bad path.

Utah has lost an opportunity to change direction.

Evil won out again… across the state.

“When over half of the population desires wicked laws and wicked rulers, the state of the people becomes precarious.

For as their laws and their governments were established by the voice of the people, and they who chose evil were more numerous than they who choose good, therefore they were ripening for destruction, for the laws had become corrupted. Yea, and this was not all; they were a stiffnecked people, insomuch that they could not be governed by the law nor justice, save it were to their destruction.” (Hel 5:2-3) 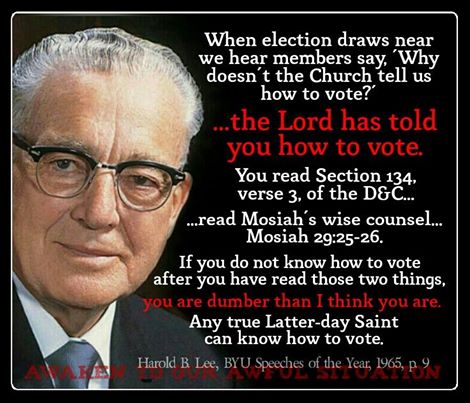