Donald & Mitt’s Love-fest. This Can’t Be Good. Can it? 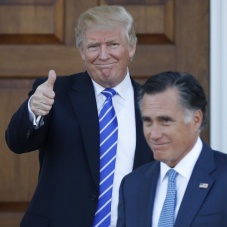 Donald & Mitt’s Love-fest. This Can’t Be Good. Can it?

The bizarro world of politics morphed into “The Twilight Zone” yesterday with President’s Trump endorsement of Mitt Romney’s candidacy for Senator of the Great State of Utah. This wasn’t a big endorsement… it was yuuge. One would never know that they’ve despised each other and have been at each other’s throats for years. Trump is not usually a guy to forgive and forget.

On the surface, the endorsement and Romney’s response looks cordial and respectful. Trump tweeted on Twitter that “@MittRomney has announced he is running for the Senate from the wonderful State of Utah. He will make a great Senator and worthy successor to @OrrinHatch, and has my full support and endorsement!”

Romney responded: “Thank you Mr. President for the support. I hope that over the course of the campaign I also earn the support and endorsement of the people of Utah.” (Gook luck with that. At least Romney acknowledges that the road to coronation is not given).

This cordial tweet exchange is as close as the two have been since 2012, after Trump won the election, and made a big deal of taking Romney out to dine and interview him to be his Secretary of State. The photo of them chowing down on frog’s legs was one of the greatest photos of the pre-Trump era. Later, Roger Stone claimed the president-elect only interviewed Romney “in order to torture him.”

Their relationship has always been strained… and often strange. The present civility could be described as an alternative reality when compared to words they’ve had for each other in the past: words like “phony” (Romney) and “loser” (Trump).

In a famously scathing speech during his second failed presidential campaign in 2016, Romney called Trump “A Con Man” whose promises are “as worthless as a degree from Trump University.” In 2016, Romney called his fellow Republican “phony, a fraud,” and went on to claim that Trump was playing Americans “for suckers” and won’t release his tax returns because “He has too much to hide.”

The 2016 speech became the catalyst for the infamous “#NeverTrump movement.” In a majestic display of Karma, a facebook community page popped up over the weekend called “Anyone But Mitt.”

The only times Romney speaks kindly to, or about Trump, is when he wants something. Romney praised Trump when Trump was shoveling money into Romney’s 2012 campaign. .

Trump stated during the 2016 campaign: “When Mitt Romney asked me for my endorsement last time around, he was so awkward and goofy that we all should have known he could not win! … Romney, who totally blew an election that should have been won and whose tax returns made him look like a fool, is now playing tough guy. @MittRomney was a disaster candidate who had no guts and choked! …. Romney is a total joke, and everyone knows it! Mitt Romney had his chance to beat a failed president but he choked like a dog.”

For all the rhetoric, Romney caved immediately. It took less than 40 minutes to accept Trump’s endorsement.

All of this bickering led to speculation that as senator, Romney could become a thorn in Trump’s side, and use it as a pulpit against Mitt in preparation for yet another Presidential run in 2020. Pundits have wondered if Romney would get along with Trump or became a leader for the Republican resistance?

All we can do is guess about why this endorsement happened. We don’t even know if Romney requested Trump’s endorsement (probably not), or if Trump made a preemptive move for reasons known only to him. Trump is a master strategist and negotiator and probably has a purpose for being positive first.

Maybe Mitt is aware that he is going to have a hard time in UT. This puts a damper on those who complain that Mitt doesn’t support our President. It also shines a light on how fake our leaders are… like one grand theater production., worth of an “Oscar”. To have the level of animosity these two have had for each other, one can only guess at the deals going down with this unholy alliance.

One Utah insider stated  that “Trump is not happy with Rob Anderson attacking Mitt Romney. I think Trump’s endorsement now is probably an indication that Trump did notice Anderson’s attacks and is trying to do damage control for the republican party. And, sadly, the President has surrounded himself with swamp creatures in the White House and cannot seem to escape their neocon globalist grip. Trump’s decision to endorse the moderate establishment RINO candidate in every Senate race to help them defeat their conservative challengers has been very disappointing, as has been his support for a pathway to citizenship for 1.8 million illegals. We  are going to have more of the same in the senate with a Democrat from Alabama and a globalist from Utah.”

Trump endorsed the establishment candidate, Luther Strange in Alabama, because he is  surrounded by swampy advisors and Moore was an outlier, but won the primary and Trump endorsed him…  too late. Trump can’t possibly know who’s who at all times. Bob bennett was endorsed by everyone, including the POTUS. He got 3rd behind Bridgewater and Lee, and Cherilyn did Eagar did well against him.

Romney’s an arrogant guy and treating this race as if no one else is in it. So, either Romney is now a swamp drainer, or Trump is a RINO. Who knew Romney was so prone to self-sabotage? The cronyism never ends