The last time I saw this level of fawning was back in 1964 when girls where screamin’ for the Beatles. Except, this is now, and about the media’s love-festival with Mitt Romney. They just can’t get enough of Romney.

Just the thought of him as a possible future candidate had them all in a dither. Will he, or won’t he? When will he announce? What will he say? They speculated for months in wonderment and anticipation.

And, then after he announced, the frenzy began. They published a lot of pictures of Mitt sitting in a chair. Mitt smiling. Mitt waving. Mitt thinking and pondering. Mitt laughing and talking on a phone. Mitt talking to the press. Mitt not talking at all. Mitt holding a baby and posing for selfies. Mitt looking at a cow, as if to say, Oh, your’re a cow. Granted, it was a really good-looking cow. Mitt posed with the cow for quite a while talking to people and answering questions.

My favorite pics are Mitt sitting in a tractor, then standing next to the big tractor wheel and actually touching the wheel. They took a pic of him touching a big wheel. Really, Mitt touched the really big wheel…. while wearing a spotless designer, Carhartt-like jacket, clean jeans and polished cowboy boots. I wonder how he got into the tractor… there aren’t any pics of that. I’m sure it was very graceful, though. I could go on and on and on and on, but you get the drift.

The tractor pics remind me of when Michael Dukakis posed in a tank, all dressed up like a soldier. And, John Kerry pretending to be a spaceman and his dorky pose with a gun. Not to be outdone,  Elizabeth Warren sat on a hog. Perhaps the original modern-day poser was U.S. President Calvin Coolidge wearing a Native American Indian headdress in 1927. But my all-time favorite poser was when Obama Shot a Marshmallow Cannon.

And, then there are all the articles and television stories. All joking aside, this may be the most biased, one-sided, Utah Senatorial race in history. I mean, after all, there are other candidates in the race that declared before Mitt. So far, the democrats are running Mitchell Vice and Jenny Wilson.

Libertarian Craig Bowden has announced along with Chris Forbush, attorney and candidate for the Nevada State Assembly in 2016, and Timothy Adrian Jimenez, an engineer. 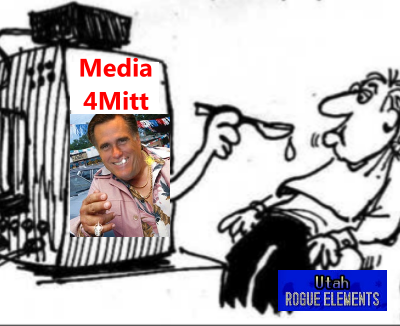 We’ve heard hardy anything about any of them.

And then, there’s the other declared republican candidate that is actually rising in the polls,, Larry Meyers. Meyers is currently at 2.1% with very little mention from any of our media outlets. For instance:

Deseret News has published 11 recent Romney stories.The last time they mentioned Meyers was in 2002 when Meyers was “accused of violating a county zoning ordinance that would allow him to keep four large animals on his nearly two-acre lot.”

The SLTrib has done 11 articles recently about Romney. Some days, they’ve been posting hourly. In one, they mentioned that “Larry Meyers, a private attorney in St. George, will also bid for the seat.” That was in an article about Romney’s announcement.

And, Good4utah did 14 recent stories on Romney. They last time they quoted Meyers was on Mar 22, 2015: “Cruz is an American patriot who stands for less government and more freedom. Sounds good to me.”

But, the Meyers campaign is fighting on. Meyers had 0% name recognition in 2017 and with only 5 weeks of campaigning, and virtually no media coverage, he has risen to over 2%.

In January, when Meyers first announced he was running, he sent a press release to all of Utah’s major media outlets. The only responses were from the Utah Standard News (yey), St. George News (boo), the Southern Utah Independent, and Channel 2 News in St. George. His recent press releases have been ignored. Though he was on file with the FEC and the Utah Republican Party as a candidate, nearly all the media stories failed to mention his candidacy. As the race has heated up, only a few reporters in Utah’s major media have taken the time to interview Meyers and report on his campaign: Brian Mullahy and DJ Bolerjack with Channel 2 News and Courtney Tanner from the Salt Lake Tribune. Conservative talk radio has been the best at covering his campaign and he has been interviewed on K-TALK radio by Jacob Hibbard, Lowell Nelson, Ben McClintock, and David Pyne.

Meyers stated: “I’m really not one to complain. Instead, I prefer to work a little harder and speak a little louder, knowing that as my campaign gains support across the state, media coverage will follow.”

Meyers has declared that he is going through the caucus-convention route instead of attempting to bypass the caucus like most other candidates. Larry Meyers is an attorney and a Constitutional conservative, and has served his community and the Republican party for decades.

He states on his site: “I WILL STAND FOR CONSTITUTIONAL PRINCIPLES

I support a return to limited government under the U.S. Constitution. We must cut federal spending and balance the budget. The federal government should not be involved in health care, “global warming” regulations, education, housing, and welfare. Let’s return power to the States and the people.

Our nation was founded on the self-evident truth that all people are endowed by God with the rights to life, liberty, and property. The proper role of government is to protect these rights, so the people can govern themselves.

I support the unborn child’s right to life.  To protect life, we must de-fund Planned Parenthood and appoint judges who will overturn Roe v Wade.

I support a strong national defense, in the tradition of President Ronald Reagan, and a foreign policy of non-interventionism, as established by President George Washington. Our military must be strong enough to deter all threats, but we would stay out of foreign wars, unless waged in defense of our nation and citizens.

I support legal immigration reforms that will open America’s doors to the best and brightest who want to work, study, and live here, while keeping out terrorists and criminals.  Our current chain migration and visa lottery programs should be replaced with a merit-based system.

I support securing our borders with a wall, where needed, and a fully-funded and staffed Border Patrol.  We should aggressively enforce our border and employment laws and cut funding for sanctuary cities.

I oppose amnesty for those who have entered or remained in our nation illegally. Giving legal status to illegal aliens is wrong because it rewards law breaking, is unfair to those trying to come here legally, encourages more illegal immigration, and is part of the Democrat’s plan to add millions of future voters to their rolls.

I will fight for the return of our public lands to State and private ownership. I support multiple uses of our public lands for recreation, ranching, drilling, and mining and will oppose restrictions on access to our energy resources. We can achieve energy independence by opening up our lands to responsible energy development.

Parents should control their children’s education through school choice options at the local level. I oppose ESSA (and Common Core) and will work to de-fund it and to eliminate the federal Department of Education.

I support prayer, traditional marriage, and the right of religious people to believe and act according to their beliefs.

I support auditing the Federal Reserve and call for a return to sound money.

Meyers also has a Facebook page and a GoFundMe account. He also has my endorsement, if he likes it or not.