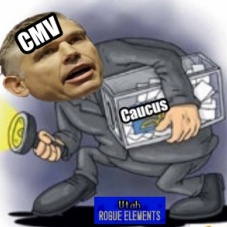 Edited at 3:35 to include screenshots (at end of article) of an e-mail exchange with an SCC member and Chairman Rob Anderson.

The Utah GOP State Central Committee (SCC) held a special emergency meeting Saturday to address the $360,000 “Count My Vote” SB54 debt, plan for future SCC and caucus meetings, determine delegate allocations, and set up a fundraising committee to help the party move forward. It was arguably the most professional, efficient and courteous SCC meeting in the history of the Utah GOP. 38% of the SCC rank & file and Executive committee members showed up and all votes were nearly unanimous.

A video, viewed over 7,300 times, of the meeting can be seen on Lisa Cummins facebook page here.

One of the primary purposes for the meeting was to address the offer by Dave Bateman, CEO of Entrata, to pay off all the existing ($360,000) and future legal debt (as much as $500,000) relating to the SB54 lawsuit. Batemen also pledged another $100,000 to help with on-going party expenses. The resolution agreeing to the deal with Bateman was passed unanimously by the 70 credentialed SCC members in attendance.

Anderson had said in a budget meeting that if the party was not out of debt by Jan 15 he [Anderson] would take the UTGOP into bankruptcy. He also threatened to drop the SB54 lawsuit because of mounting party debt. Twice, under different SCC members, the party has voted to continue the lawsuit if no party funds are used. Some SCC members felt that Anderson was trying to run out the clock.

One SCC member explained it this way: “Members of the committee had a verbal contract with Bateman. The Chair intervened after they had an agreement. The Chair changed the agreement and made it a point of the contract that the donor would be held legally liable, as a litigant in any legal proceedings. It is just unacceptable to make a donor a litigant. The Chair claims to stand by our governing rules then violates them time after time. You couldn’t script a better villain to take down the Party if you tried.”

Batemen stated: “There were two paths to reach an agreement so I could pay off the existing GOP debt, and fund the SB54 repeal effort going forward, and help the party avoid bankruptcy:

1 – Call a special State Central Committee meeting to gain an approval and commitment directly from the governing body.

2 – Enter into a contractual agreement with Chairman Rob Anderson who could sign on behalf of the party.

Chairman Anderson assured me and everyone else he would sign the contract, and asked the SCC to drop the special meeting. The SCC members who called the meeting refused, so Anderson went public and announced we’d reached an agreement, and falsely announced the cancellation of the meeting.

Then the Chairman received the entirely reasonable agreement proposal, and removed all the key provisions resulting unavoidably in the contract negotiation blowing up. He even added “The UTGOP retains any and all defenses and claims that it would have against the Legal Firms against Bateman.”, illegal…. which is not true according to registered parliamentarians. The Chairman has fought rigorously to prevent the party from receiving funding at every turn. Watch this video to learn why:”

Bateman was offered a position on the legal committee to oversee the lawsuit. He declined.

In increasing numbers, SCC members are beginning to feel that they were deceived by a chairman they believed they elected to protect the Caucus System, defend the lawsuit, and pay off the legal fees owed by the Party.

Alyson Williams stated: ‘Rob was elected after he lied about his support of the caucus and commitment to raising money to pay the debt… never a mention of bankruptcy or restructuring. I was there and his most persuasive talking point was that he was so adamant about being fair in paying people, which of course bankruptcy wouldn’t do. Had all the delegates known his true intentions and not trusted him at his word I think the result would have been different.’

Rob Anderson mocked SCC members as “fearmongers” and that they were falsely maligning him when they accused him of being a count my vote candidate. Anderson campaigned for the Chairman position as a protector of the traditional Caucus/Convention system. He produced a video for that purpose: “I’m not the Count My Vote candidate!”

However, he sent Dave Bateman a letter, acknowledging that he did sign the Count My Vote Petition, and he publicly released the letter this past week.

Anderson also released a Dave Bateman “Timeline” (click here) that outlined his recollections of the events that occurred concerning Bateman’s offer to pay off the debt incurred and future costs relating to SB54. There were egregious omissions in the timeline. Anderson also listed the reason why the meeting was “invalid”.

One independent parliamentarian stated: ‘Nothing in the existing Republican Party Constitution or Bylaws, which are also subject to state statute, suggest that the absence of the chair or vice chair of any group, having adopted the current/present Robert’s Rules of Order imply that an officially called meeting of the State Central Committee would be illegal or inappropriate.”

Wendi Baggaley stated: “Whether party officers or members recognize this or not, this ability for 25% of the SCC to call a special meeting is actually a very important check on the party chair and vice chair. In return, if the work done at the special SCC meeting is out of bounds, then the chair and other members of the SCC have the right to bring those issues up at the next meeting and vote to overturn what was done. In any case, this is a great opportunity to see how self-governing people can work out problems and move forward, despite our very human weaknesses.”

Another SCC member said “We simply want to, in a way acceptable to the generous donor, reach an agreement to eliminate the party’s debt. Not sure why anyone who supports the party would be opposed to any of that. Yet, the chair seems desperate to keep that from happening.”

Anderson and the GOP staff pulled out all the stops in an effort to sabotage the meeting by falsely asserting that the meeting was unnecessary, improper, illegal, and cancelled. Those efforts included bullying and harassing party members, using false rules information, attacking the secretary for doing her job, robocalls and personal calls to not attend the meeting, and encouraging a standoff. It was clear that Anderson not only targeted SCC members, but anyone (thousands) who they had emails of.

By doing that, Anderson and his “supporters” used party donated funds against members who were solving the money issues by finding new millennial donors. Anderson did not attend the meeting and Joni Crane, the elected Vice-Chair, REFUSED to attend. Lisa Shepherd, Party Seceutary, was the only elected officer present. Anderson had commented that the meeting notice sent out by Shepherd was “unprecedented”.  The sentiment among most SCC members is that “the “precedence” is that the elected seceutary is doing the job to which she was elected – contrary to the observed actions of the Chair.

Ed Wallace, Publisher of USN, stated: “The simple fact is that the leaders of the Utah Republican Party are responsible for CMV and are now crying to end the suit, knowing that they could very well lose. The Media, CMV and SB54 folks have used the party debt as a club to beat up the party and force them to do their will for years. Very powerful people don’t like it when the Grassroots organize and take care of business and will stoop to any method of thwarting the effort. If the Republican Party has to go down in order for “The Empire” to maintain control, then so be it. There are casualties in every war.”

If CMV passes, Utah’s media outlets will make a killing on primary campaign advertising. One political consultant stated “So much of this [CMV] has always been about lining the pockets of the consultant class. As a former (and sometimes current) member of the political consulting class, I can tell you that primaries are money makers for “campaign professionals”, and that mostly means media/ad buys.”

Cory Green stated: ”Governor Gary Herbert’s pen (signing SB54 and vetoing Constitutional carry), has done more damage to the Republican party and the God given rights of Utah residents here in Utah, then any individual ever could. It is a shame that moderates RINO’s still support Gary Herbert and still have his back over the damage and debt Gary Herbert’s actions, or lack thereof, have caused the party by him signing SB54. The SCC and all of the good people therein that showed up to this meeting are not to blame for the parties troubles, they are simply doing the right thing and cleaning up the Governors mess.”

Kirby Glad (parliamentarian) was elected as chair pro tem for the meeting and did a masterful job. He took time to facilitate and inform with respect and humor, as it should be done, instead of acting like a dictator. One member said “I have never seen a meeting so well led as today. After attending the last meeting and contrasting the two, it was patently obvious why we need true parliamentarians running our meetings.”

The meeting was attended by SCC members from all over Utah, from Cache and Box Elder Counties as well as Iron and Washington, and everywhere in between. One attendee drove overnight from LA and was very grateful for the breakfast buffet. Another member said “I did not show up today as a Rob supporter. If anything, his intellectual dishonesty reinforced this week my angst with him, Joni and the entire staff.”

One leading member stated: “ We should consider removing those leaders and staff. Rob Anderson is NO leader. He is a first rate bully. I don’t stand for bullies. Any donor should think twice about donating with that untrustworthy bully, Rob Anderson, as the chair.”

Ed’s note: The ball is in Rob Anderson’s court. He has until January 12th to make a deal with Bateman. The longer this plays out the more foolish the Chair looks to the public for not coming to the table. I would suspect a major legal battle is brewing to decide who is really the governing body of the UTGOP. To his credit, Paul Rolly wrote a fair and balanced article regarding the meeting. 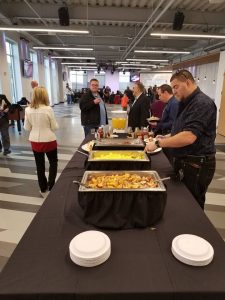 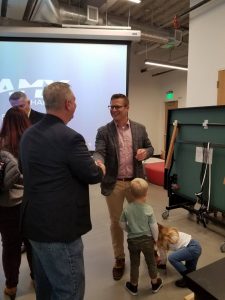 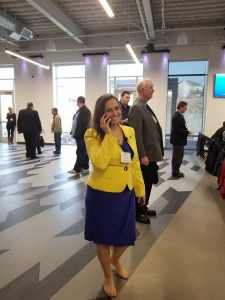 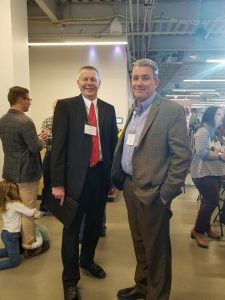 This is an e-mail exchange with an SCC member and Chairman Rob Anderson: