Media in Lockstep Over Bateman and UTGOP Agreement About CMV 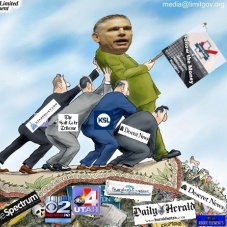 If nothing else, the Utah mainstream media is fairly consistent in being unfair by slanting their stories in a way that defies reality by misrepresenting and/or omitting the facts. Two of the three ‘mainstream’ outlets that covered yesterday’s announcement of the UTGOP’s agreement with Dave Bateman were very similar in their approach.The two headlines say it all:SL Tribune – Big donor agrees to cover cost of GOP lawsuit against new Utah election law

The rest of the media just ignored it except for KUTV 2, who presented a balanced and fair report, including a quote from Bateman. Deseret News, KSL5, KSL.com, Good for Utah 4, and the Daily Herald had no mention of this story at the time of this article going live.

What is missing from those stories is the history behind the SB54 legal challenge by the UTGOP and GOP Chairman Rob Anderson’s attempts to stop the lawsuit and put the party into bankruptcy.

The agreement reached with Dave Bateman extinguishes the party’s debt and future costs relating to the litigation of the Count My Vote SB54 election law. What the two articles don’t mention is that the agreement comes after a special Utah State Central Committee (SCC) emergency meeting held on Dec 16, 2017 to address the SB54 debt and future costs and other crucial matters that Anderson was ignoring.

One knowledgeable source said: ”Governor Gary Herbert’s pen (signing SB54 and vetoing Constitutional carry), has done more damage to the Republican party and the the God given rights of Utah residents here in Utah, then any individual ever could. It is a shame that moderates RINO’s still support Gary Herbert and still have his back over the damage and debt Gary Herbert’s actions or lack thereof have caused the party by him signing SB54. The SCC and all of the good people therein that showed up to this meeting are not to blame for the parties troubles, they are simply doing the right thing and cleaning up the Governors mess.”

One of the primary purposes for the meeting was to address the offer by Dave Bateman, CEO of Entrata, to pay off all the existing (around $360,000) and future legal debt (as much as $500,000) relating to the SB54 lawsuit. Bateman and tech-entrepreneur Josh James also pledged another $100,000 to help with on-going party expenses. The resolution agreeing to continue the lawsuit and take the funding offer was approved with a vote of 68 yes, 1 no, and 1 who abstained. The resolution effectively took Anderson out of the loop.

One member stated “He [Anderson] has ZERO authority to negotiate anything regarding the lawsuit or legal debt. In fact, Rob has ZERO authority to be involved in ANY of it. That authority was taken away from him by the SCC. The committee was simply being polite by giving him the opportunity to agree to the proposal.”

In other words, Anderson was forced to sign the agreement with Bateman. This clears up any confusion as to who controls the UTGOP. Anderson was not the hero here. Instead, he was put in his place by the rightful leaders of the party… the SCC and the members of the Republican Party.

Anderson and the GOP staff pulled out all the stops in an effort to sabotage the meeting by falsely asserting that the meeting was unnecessary, improper, illegal, and cancelled. Those efforts included bullying and harassing party members, using false rules information, attacking the secretary for doing her job, robocalls and personal calls to not attend the meeting and encouraging a standoff.

Anderson had said in a budget meeting that if the party was not out of debt by January 12, 2018, he would take the UTGOP into bankruptcy. He also threatened to drop the SB54 lawsuit because of mounting party debt. Twice, under different SCC members, the party has voted to continue the lawsuit if no party funds are used. In increasing numbers, SCC members are feeling that they were deceived by a chairman they believed they elected to protect the Caucus System, defend the lawsuit, and pay off the legal fees owed by the Party.

Ed Wallace, Publisher of USN, stated: “The simple fact is that the leaders of the Utah Republican Party are responsible for CMV and are now crying to end the suit, knowing that they could very well lose. The Media, CMV and SB54 folks have used the party debt as a club to beat up the party and force them to do their will for years. Very powerful people don’t like it when the Grassroots organize and take care of business and will stoop to any method of thwarting the effort, thus Count My Vote. If the Republican Party has to go down in order for “The Empire” to maintain control, then so be it. There are casualties in every war.”

Neither of the two articles mention any of this. Instead, they showed their bias for Anderson by allowing him to paint himself as the hero, and against the rank and file SCC members.

Neither of the articles contain any quotes from Bateman or any of the members of the self-governing SCC that stepped up and did the job that Anderson was elected to do.

The following are quotes from the two articles:

“Conservatives dominate the central committee, which has pushed the lawsuit.

But moderates contend delegates tend to be extreme and choose nominees outside the political mainstream — as shown when ultraconservative Chris Herrod was nominated by delegates in last year’s 3rd Congressional District special election, but was easily defeated by Provo Mayor John Curtis, who qualified for the primary by gathering signatures.

“Anderson added that he just had a conversation with one of the party’s attorneys, “and he was thrilled. I told him that before I showed up, ‘you were never going to be paid, you know that.’ He said, ‘I know.’”

“This absolves me of any responsibility to take any monies and use those to pay any litigation expenses,” he said. “I’m working on relationships and getting people back to the party, and forging new relationships as well.”

“I think the legal monkey is off our back,” said Anderson.

“The party had been hampered by that legal debt as many big-pocketed donors did not want their donations to pay for a lawsuit they did not agree with as they supported the SB54 law. But, the right wing of the party kept the suit alive despite the mounting debt.”

“Now that we’ve taken the financial burden off the State Central Committee and they have an unlimited bucket of money for litigation, why not take this all the way to the Supreme Court if they continue to get an answer they don’t like from the courts?” said Anderson.

“With the burden of the legal bills off his back, Anderson says he is free to focus on paying off the operational debt of the party which was left over from his predecessor.”

“But, just because the party will be debt free for the first time in years doesn’t mean Anderson is ready to start spending freely again. He says he hopes to tap party faithful as volunteers to fill crucial roles, an idea he’s taking from Rep. John Curtis’s successful run for Congress last year. “I saw what he was able to do with mostly volunteers and I was impressed. I told him I wanted to model the party after his organization because they were very successful.”

Anderson is impressed and referring to the election of a man who is arguably the most inept and deficient person ever knowingly elected to public office in Utah.

Journalism, or the so-called ‘Fourth Estate’, acts as a vital check and balance on the activities of government, the political system and the judiciary, and must be free from undue or corrupting influence or leveraged by bias or agenda. One’s judgment is no better than the information it is based upon. A person may still judge wrongly when presented the truth, but they had the opportunity to be right. If one is given no news or biased, sloppy, distorted or incomplete information, filled with deliberate propaganda and falsehoods, then their whole reasoning process is corrupted or completely destroyed. Essentially, our current media outlets and the news that they report avoids thought vastly more than it rarely enlightens thought. To paraphrase Mark Twain, “If you don’t follow the news, you are uninformed. If you do follow the news, you are misinformed.” 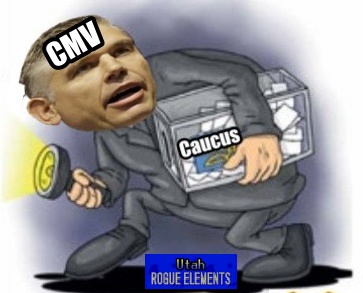