Are we witnessing a silent coup d’etat?

Donald Trump’s victory unquestionably came as a shock to the establishments of both major political parties and to the Washington D.C. swamp dwellers. However, they are not about to give up their power without a fight and now there are multiple indications that they are all working together in order to remove a duly elected President by a silent coup d’etat.

David Plouffe, President Obama’s campaign manager and former Senior White House advisor tweeted well before the election that “It is not enough to simply beat Trump. He must be destroyed thoroughly. His kind must not rise again.” Senior Obama officials subsequently have been accused of seeding agencies with leakers and unmasking the names of Trump associates in intelligence reports. And it was reported that “Obama’s goal is to oust Trump from the presidency either by forcing his resignation or through his impeachment.”

Following Trump’s electoral victory, Hillary Clinton and her campaign manager, John Podesta, immediately set about challenging the legitimacy of Trump’s election by claiming that he only won because of Russian interference in the election process. They were quickly joined by Democrats across the nation as they denigrated the Trump victory and called for investigations, special prosecutors and impeachment.

In the Washington Post, Liberal icon Laurence H. Tribe, Professor of Constitutional Law at Harvard Law School, set forth the case for Trump’s impeachment in a column titled: “Trump must be impeached.  Here’s why.”

The Republican establishment opposed Trump from the day he announced his candidacy with Bill Kristol and Ross Douthat going public with their plans to overthrow Trump.

Kristol recently tweeted that “GOP members & donors are in grip of quiet desperation. Task of anti-Trump Republicans isn’t to say I told you so, but chart path forward.  Several of you have asked, What IS path forward? Well, we’re working on it. Disposing of Trump & overcoming Trumpism can’t be done in a day.” In a New York Times column, Douthat called for the removal of Trump by invoking the 25th Amendment.

Failed presidential candidate, Senator John McCain, along with his fellow-travelers Lindsey Graham and Jeff Flake have thrown in with other Congressional coup plotters. At least two Democrat Senators and 18 Representatives have called for the impeachment of the President including Republican Representative Justin Amash.

Other Republicans have come close to calling for impeachment and former anti-Trump Presidential candidate and CIA operative, Evan McMullin may have taped and leaked a Republican leadership meeting where House Majority Leader Kevin McCarthy said that Donald Trump was on Putin’s payroll.

Most disconcerting and dangerous is the role that the intelligence community is playing in the silent coup as it releases classified information in an attempt to bring down a President. This politicization of the intelligence community coupled with the massive amounts on sensitive information that it has on every American creates an unprecedented internal threat to the United States of America. 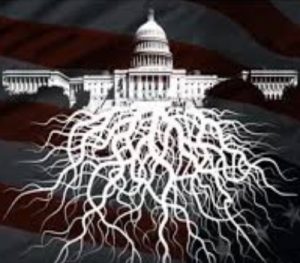 Virtually all of the major media outlets have joined forces with the intelligence community to build support for a silent coup that would remove a duly elected President from office. They base their reporting on unnamed sources and documents that they cannot authenticate, do not possess and admit are partial. Media bias is so bad that a Harvard study found that “ the tone of some outlets was negative in as many as 98% of reports.”

Thus, the Democrat party, establishment Republicans, members of Congress, the intelligence community, the media and the swamp people all appear to be engaged in an extremely dangerous attempt to stage a silent coup.

Forty years of overseas experience including responses to humanitarian crises following coups and regime change in multiple countries have shown me just how fragile the social contract is and how quickly countries can descend into chaos once the existing order is upset. Even though we may not readily recognize it, we live on the razor’s edge and it takes very little to replace peace with conflict. A silent coup further erodes the confidence of Americans in their governmental institutions, increases divisions among the American people and, in the worst case scenario, leads to violence. Is this really what the coup plotters want?